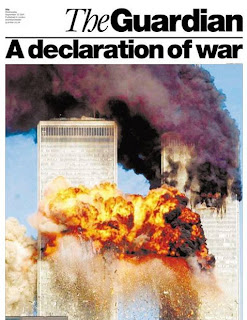 Today has dawned bright and clear, just as it did over New York City ten years ago. What the weather was like where I found myself then doesn’t come readily to mind: it was just after lunch and I was secreted away in a large computer room, proving an unattended software update. That may sound a bit nerdy, but, hey, it was going to be rolled out to tens of thousands of desktops.

The colleague working with me on the exercise came in and said an airplane had crashed into one of the two towers of the World Trade Center. Well, there were lots of planes in the air around the area during the day, so perhaps it was an accident, albeit a catastrophic one. Half an hour later he was back with news of the second tower. The realisation dawned that this was deliberate.

Back in the office later in the afternoon, we saw the towers collapse. Someone said that hundreds must have died in the carnage. I corrected him: it was going to be thousands. Arriving home brought the news of the Pentagon attack and United 93. A couple of days before, I’d been told that this work assignment would not continue after the end of September, then told not to worry.

There would be a reconsideration, there always was. But this was a US based company, and looking at the images and hearing the news, I knew that there wouldn’t be a change of mind. Many of my freelance worker colleagues also made their last start at the end of September. But, looking back at the events in the USA, I did not consider myself unlucky.

After all, by the end of September, flying was getting back to normal – albeit with a bizarre ban on hand luggage – and I was able to share an idyllic week on the island of Santorini, taking in the wonderful sunsets, the clifftop village of Oia, the restaurants overlooking the Caldera, the bars, the shopping, and the relaxing and agreeable company.

For the 3,000 caught up in the World Trade Center – those who could not get out, and those who could not get them out – there would be no sunset looking out over the Aegean, no bus journey out to Akrotiri, no yogurt and honey over breakfast, no flask of retsina to wash down the souvlaki. Because they had not just lost their jobs, but their lives.

I had been exceptionally lucky, more than fortunate: so many of us are. Only at times like 9/11 do we realise it.

I was in Tenerife when it happened. A few hours after reports were released suggesting a lock down on all airports.

I thought, for a few seconds, that I was going to be screwed getting home and that this would be crap because I was starting a new job.

Then I called myself a tosser out loud for being such an inconsiderate prick.