Virgin On The Resurrected – One In The Eye

The tired but true line goes that a week is a long time in Politics. It’s an equally long time in the politics of the rail industry, too: last week it was thought that the DfT would be putting the InterCity West Coast (ICWC) franchise up for bids, staying on course for a new franchise period to start in 2012. That timetable is now well and truly in the bin.

So that’s one wrong call for Railway Eye, the supposed blog about railways that has managed to miss the South West Trains (SWT) sacking story completely, which operates a zero comments policy, and asserted triumphally last October that incumbent operator Virgin Trains (VT) “fails to win extension”. VT will still be in place into 2013, so an extension has been won.

And I predicted last September, after observing the farcical way that the DfT had raised expectations that new trains being delivered for ICWC could be kept away from VT and operated elsewhere, that VT would win an extension. At the time I reckoned they would get another five years, and still reckon that there might be life in the existing franchise even after the delay being announced this week.

Any further delay might not be welcome news for FirstGroup, Abellio (aka Netherlands Railways) and French national operator SNCF, like VT on the short list for ICWC, and who will all have already expended seven figure sums on their bids. But it is, unfortunately, par for the course for DfT. 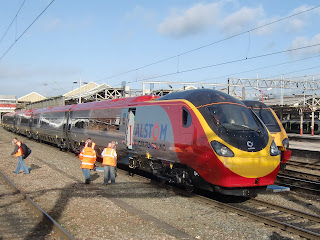 Going into service with Virgin Trains after all

Meanwhile, the first of those new trains that were going to be kept away from VT, and which the DfT then wanted to diagram themselves (not even VT says which trainset operates which diagram – that’s down to builder and maintainer Alstom), is to join the VT fleet, and as it’s already racked up plenty of test mileage, that will happen well before the end of the current franchise period.

The railway can be a funny old game nowadays, especially when the Civil Service sticks its bugle in.
Posted by Tim Fenton at 17:15