Another week begins, with another lame attempt by the Desmond press to demonise the EU talked up into leading today’s Daily Express. There is a certain fascination in taking apart Express Euro frighteners, as this is not only a rare example of original content in the paper, but also contains a kernel, however small, of factual information. 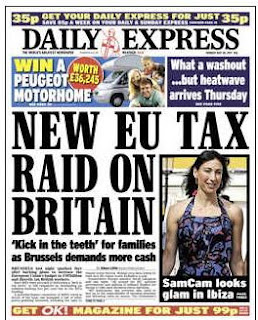 Sadly, though, the headline – “New EU Tax Raid On Britain” – is plain flat wrong. And the giveaway comes in the first line of the piece, which claims “Brussels last night sparked fury after backing plans to increase the ... budget”. Er, hello? The European Parliament was sitting on a Sunday? And no, it wasn’t.

But there are some quite specific allegations in the article, not least “a raft of other power-grabbing measures, including the right to impose levies directly”. And no Express Euro horror story would be complete without “Britain even faces losing its hard-won EU rebate worth £2.6 billion a year”. So what’s the reality?

Fortunately, the Express mentions the name that unlocks the mystery: Salvador Garriga Polledo, who sits on the Committee on Budgets. Sr. Garriga (who is merely a member of the committee – he isn’t its Chairman or Vice Chairman) has authored a report which will feed in to a discussion on future EU spending.

The report addresses questions such as “How big will the EU budget be? Will it be funded differently? And what happens to temporary rebates for certain EU Member States?” to which the Express has answered “[the budget] would soar, directly tax British workers, and Britain faces losing its EU rebate”.

But, of course, no conclusion has been reached, as the Garriga report has fed into a meeting of the Policy Challenges Committee – this happened on Wednesday and Thursday of last week – which has then voted its position on proposals for the 2014-2020 budget period (this was the vote the Express piece referred to).

Even the Express manages to admit that “The final deal will have to be agreed by all 27 member states”, although it omits the key fact that the UK is one of those 27, and is likely to have significant support for the idea that any budget increase should be far less than the 5% initially proposed. But nothing was demanded last night.

Baseless Euro scare stories? That’ll be another Benchmark of Excellence.
Posted by Tim Fenton at 11:51