Express – Three Howlers And You’re Out

Standards do not seem to be improving at the Desmond press, if today’s item in the Express’ “City & Business” section is anything to go by.

The piece, which discusses transport operator National Express, does not get off to a good start as “Daily Express Reporter” has difficulty spelling the word “Express”, which is in itself strange, since that word is part of the paper’s name. 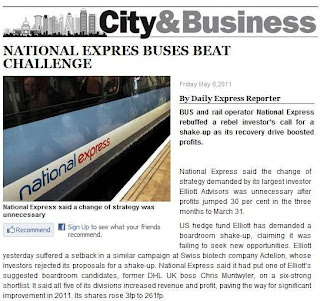 Then we see the effect of sending all those sub-editors down the road, as the National Express share price is quoted as having risen “3fp to 261fp”. Perhaps the way in which Sterling prices are expressed has been changed in the past 24 hours, but I doubt it. It’s just another howler.

And the story itself? This is, as with so much at the Express, an item that has featured in another publication previously. In this case, the story was covered in the Wall Street Journal the previous day. Also, the Express shows in the detail of its own piece that all of National Express – not just the “Buses” part asserted by its own headline – improved its performance.

Three howlers in one short article? That’ll be another Benchmark of Excellence.
Posted by Tim Fenton at 13:44