Richard Desmond’s dwindling and increasingly desperate band of hacks at the Express is at least consistent in one of their habits: if the facts don’t happen to exist, then inventing them, and in the most shameless manner, is not a problem. Perhaps they think that their equally dwindling readership is incapable of looking beyond the headline.

Today’s superb example of Express creative headline writing, as so often nowadays, is on the subject of the EU. And by a happy coincidence, one of those softy Lib Dems gets it in the neck, too, as the problems facing Greece get a factual makeover in a piece to which none of the Desmond hackery has lent their by-line. 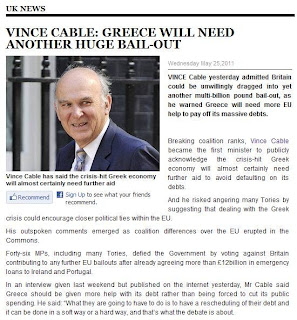 The headline leaves no doubt: Vince Cable has said that Greece will need another bailout, and it will be not only “huge”, but also a “multi-billion pound” one. Problem is, he didn’t say that: Cable was talking about “a rescheduling of their debt”. I know this, as the same Express article says so. So by its own admission, the Express headline is, shall we say, factually incorrect.

What Cable’s comments did indicate, and the Express barely mentions, is a level of candour that has not gone down at all well with the Rt Hon Gideon George Oliver Osborne, heir to the Seventeenth Baronet. The inevitable “official spokesman” has been deployed to stress that Cable isn’t making policy. At least the Maily Telegraph has got its priorities right on this one.

Why the Express keeps pumping out totally fraudulent headlines is mystifying: perhaps the readers actually believe it. But it’s not going to make converts, with the risibly bad reportage and the same small band of talking heads – in this case, Tory MPs Douglas “Kamikaze” Carswell and Mark “Reckless” Reckless, the latter having made his debut on the Commons terrace last summer in a way he has since regretted.

Repetitive, fact free and misleading journalism? That’ll be another Benchmark of Excellence.
Posted by Tim Fenton at 12:24