Eurozone: The View From Lisbon

The at present interim Government in Lisbon – PM José Sócrates recently resigned as head of a minority PS-led administration – has agreed terms for a bailout. This has been widely reported, but for MEP and occasional Tory Dan, Dan The Oratory Man this is not enough. Hannan has therefore been using his pulpit in the bear pit that is Maily Telegraph blogland to put his case.

What irks Dan – and is hardly pleasing news to those other arch-sceptics at the Daily Mail – is not only that they don’t agree that anyone should be getting bailed out, but also the assertion of Sócrates that “there would be no civil service cuts, no changes to job and welfare entitlements and no cut in the minimum wage”. But Sócrates is, in the first two of those assertions, probably right.

That is because the Portuguese austerity programmes previously enacted have already cut public sector jobs, pay and entitlements. There is still the possibility of a further VAT rise – put forward as an alternative to a pension freeze, as I observed at the time – but much of the action considered necessary has already been taken. 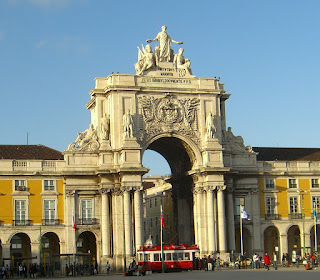 Visit Lisbon - the sights are worth a look ...
Those cuts already enacted, as I pointed out last October, include reductions in family allowances, a cut of “up to 10%” in public sector pay (although increased pension contributions in many cases make the effective cut larger), and a two-pronged increase in VAT: a rise in the rate levied, together with the move of some goods from lowest or middle rate to the highest. 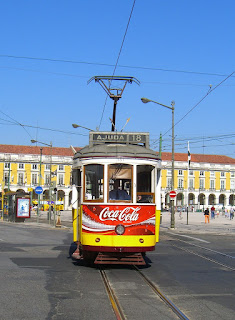 As to whether these measures, together with the bailout, will be sufficient to restore the fortunes of the Portuguese economy without another “Haircut” for those lenders at the back of the queue, we will have to wait and see. As I noted earlier today, there is a very strong possibility that Athens will subject some lenders to a haircut, and that could well signal a similar move from Dublin.

Lisbon might take its time, but if Greece and Ireland were to see some benefit from applying the haircut technique, the then Government in Portugal could not be blamed if it followed suit. And, as I’ve previously told, it’s “priced in” to the deals.
Posted by Tim Fenton at 19:08