TPA – Sponging Off The Taxpayer AGAIN

It’s time for me to hold my hands up and concede that I called something wrong: when I claimed earlier this month that the so-called Taxpayers’ Alliance (TPA) had stopped using the publicly funded w4mp.org website for their job adverts, and were therefore no longer sponging off the taxpayer, I was wrong.

Because this week the TPA have been using w4mp.org again, and unlike the previous advert, which was for an unpaid intern, this one is for a salaried employee. It’s for Big Brother Watch, although that organisation states on its website that it is “A Campaign From The TPA”, and is based at the same address. 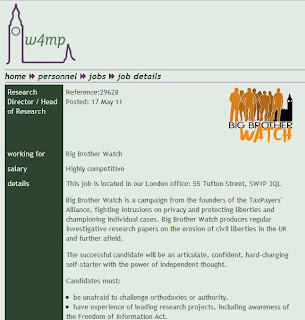 Big Brother Watch is after a “Research Director”, which sounds rather like Senior Spreadsheet Person. The organisation is all about protecting civil liberties – although this of course does not include the liberty to know who funds them, or the TPA. What it is not about is working with MPs.

And that is unfortunate, because although w4mp.org does allow adverts that are unconnected with working for MPs and other Parliamentary bodies, the TPA and its spin-offs are nothing to do with this country’s governance, and have previously made adverse comment on those it claims are riding on the backs of taxpayers.

... nor anything to do with the House Of Commons

In fact, as I noted previously, the TPA has claimed that Government is funding lobbyists and environmental groups, although in both cases no link was proved, despite all the FoI requests. The conclusion in both cases was that no such funding should take place. So by the TPA’s own reasoning, they too should not benefit from taxpayer funding.

But w4mp.org is a taxpayer funded resource. So the TPA is not only sponging off those it claims to represent, it is going against its own conclusions. It’s clear that the comfortable of Tufton Street are shameless enough not to be troubled about this, but is high time this unprincipled shower took their advertising elsewhere – and paid the full market rate for it.
Posted by Tim Fenton at 15:03