Fat Dick And The F Word

The editor of the Daily Mail, Paul Dacre, is renowned for being legendarily foul mouthed, but what is said in editorial meetings stays on that side of the wall: the paper does not do effing and blinding. Or at least it didn’t until today.

Because Dacre’s premier churnalist Richard Littlejohn has managed to slip the word “effing” into his latest turgid column not once, but twice, as he rails against Young Dave’s restatement of the UK’s foreign aid commitments. 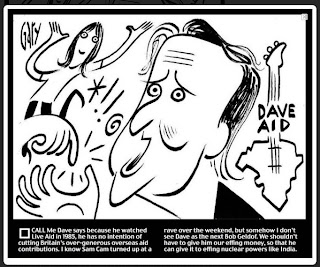 Click to enlarge and see the effs more clearly

It would be easy to miss in the on-line version, but when the image is enlarged, the word leaps off the page, as Fat Dick rants “I don’t see Dave as the new Bob Geldof. We shouldn’t have to give him our effing money, so that he can give it to effing nuclear powers like India”.

Thus something to think about the next time Dacre and his obedient hackery go into why-oh-why mode about young people and their propensity to swear (like HERE, also in today's edition). The most righteously minded of newspapers is setting a very poor example, as well as displaying a routine helping of hypocrisy.
Posted by Tim Fenton at 09:00