Just occasionally, I wonder if hacks actually engage brain before writing their headlines, and this afternoon a superb example of this ability to perform the on-line foot in mouth has come from the Maily Telegraph, reporting on the fall-out – literally – from the eruption of the Grimsvotn volcano in Iceland.

The headline is unequivocal: “Ryanair flies plane through Icelandic volcano ash cloud” it tells. But Ryanair has done no such thing: the “verification” flight, from Prestwick, which overflew Inverness, Aberdeen and Edinburgh, flew through an area where the concentration of volcanic ash had been predicted to be high. 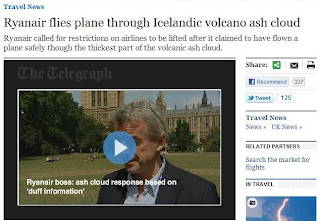 But no significant amount of ash was found during the flight, and this was confirmed by a walk-round after the aircraft landed back at Prestwick. That was the point being driven home by Ryanair CEO Michael O’Leary: his complaint was that predictions of volcanic ash concentration had been wrong.

That was also reinforced by a press release on the Ryanair website. All that the Telegraph needed to do was look there before leaping. Or read the body of their own report.
[UPDATE: The Telegraph has now changed its headline]
Posted by Tim Fenton at 18:55