The part of the Fourth Estate that leans to the right generally enjoys kicking the BBC. That much is not surprising. But the level of sheer pettiness exhibited by the obedient hackery of the legendarily foul mouthed Paul Dacre today is crass, even alongside the usual whingeing.

Because the latest Mail wheeze is to carp about the title sequence of long running soap EastEnders. One of Dacre’s dubiously talented hacks – the name Chris Hastings appears on the by-line – has figured out that the titles, which show London’s East End from the air, have not been changed to reflect the still unfinished site for next year’s Olympic Games. 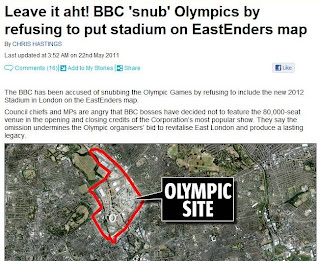 Not only that, but three local MPs have also grumbled about the omission, although careful examination of their comments does not match the tone of the article, which is pushing the assertion that the Beeb has “snubbed” the Olympics. After all, Hastings tells us, the Millennium Dome was put on the EastEnders map.

But, so what? The Olympic site is still unfinished, and rehashing the titles for the soap would come with a non-trivial price tag. Had the BBC gone down that road, the Dacre hackery would then be berating the Beeb about wasting licence payers’ money.

It’s another example of the Mail wanting to have it both ways: they kick the BBC if it does what they demand, and do the same if it doesn’t. This pointless carping only underscores Paul Dacre’s obsession with the Beeb, and fails to move his cause forward. At all.
Posted by Tim Fenton at 10:24