Express With The Doublespeak

In these days of falling circulation, a paper that bucks the trend has cause for celebration, and that is just what the Daily Express appears to be doing today. The story, “More Are Joining Our Family Of Readers”, under an anonymous by-line, tells that “According to official ABC figures we added another 14,960 sales in April”. 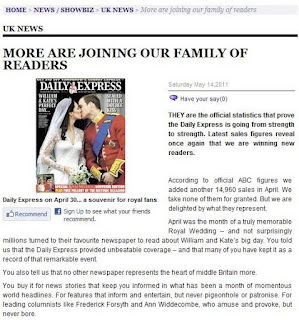 Sounds impressive. But – and with the Desmond press there is always a but – this is not the whole story, being a selective interpretation of those figures. The circulation of the Daily Express did indeed rise between March and April, but then, so did that of the Daily Mirror, Daily Mail, Daily Telegraph, Guardian and Times.

And it’s not hard to figure out why those papers put sales on: the Royal Wedding, with its attendant build-up, had pages of copy devoted to it, and titles like the Express put out “souvenir editions”, which would have involved opening the Desmond wallet that little bit further.

Moreover, when the year on year circulation figures are compared – that is, putting April 2011 alongside April 2010 – the Daily Express actually lost 4.53% of its circulation. And the Daily Mail – the first choice of Middle England – is outselling it by well over three to one.

Talking up an also-ran? That’ll be another Benchmark of Excellence.
Posted by Tim Fenton at 11:06