Reflections On A French Break

A break from blogging for the weekend – because this has been the time for one of my occasional trips across the Channel. It’s the kind of occasion that points up what makes the UK and France different – and what is just the same, whichever side of La Manche you happen to be.

After a longer than intended spell navigating the UK’s state specified and funded motorway network – not a peep from the so-called Taxpayers’ Alliance, though – I fetched up at the tunnel terminal near Folkestone. For me, this is the only way to cross the Channel: the shuttles depart on schedule, and to the minute, a contrast with the haphazard timekeeping of the ferries. 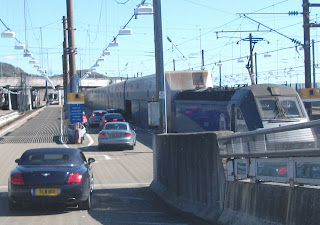 The only way to France (not my Bentley!)

And the journey takes 35 minutes, with arrival also on the dot. All the Customs business is done before you board, and so there is none of that driving slowly away from the passport check on arrival off the boat at Dover, with the assembled representatives of HMG staring you down for a bit of sport before you clear the roundabout and drive off towards London.

In France, as Charlie Croker observed in The Italian Job, they drive on the wrong side of the road. But much else is familiar: the iffy road surface following last December’s cold, the British names on the shops glimpsed as you pass Cité Europe, and the wind turbines. Yes, there are wind turbines. 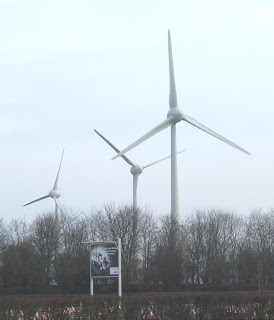 France gets almost 80% of its electricity from nuclear power – the plants all use Pressurised Water Reactor (PWR) technology – yet there are those ubiquitous wind turbines everywhere. It’s the kind of thing that may be borne in mind when the Delingpoles of this world beat the drum for nuclear, while ridiculing wind power.

France still uses a mixture of power generation types. One reason for this is that nuclear power is not good for demand patterns that vary significantly over time: some nuclear stations come off load at weekends and have to shut down, which isn’t good for the economics of the technology.

And renewables are an increasing part of that mixture. Oh, and for those thinking that an overnight stay in France might be something special, I can report that the facilities on offer at budget chain hotels, and the view across an industrial park, is pretty much the same as in the UK. So that’s another similarity, then.