Express Inflation – Both Story And Figures

As I noted yesterday, Portuguese PM José Sócrates has resigned, having failed to get his latest austerity package through Parliament. Thus the shock horror part of the Fourth Estate has already decided that, whoever prevails in the upcoming elections in Portugal, there will be a bail-out, which will somehow involve the UK.

The usual anti-European suspects in the press have turned to their favourite source of frighteners, Open Europe (which is in reality an anti-EU lobby group), for suitably scary figures. And the Open Europe scary number is that the UK might have to pay £300 per family towards bailing out Portugal.

That, however, is a very big “might”: it would depend on there being a bail-out in the first place (one has not yet been requested), and all the remaining contents of the fund to which the UK has agreed to contribute would have to be used up. Then, there would have to be an additional intervention by the IMF to bring the total up to match the scary number. 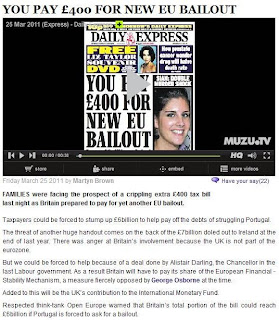 But none of these caveats cut any ice with the Daily Express, for whom the unequivocal demonising of the EU is the highest priority, if only to keep folks buying the paper. Thus their headline thundered “You Pay £400 For New EU Bailout”, having not only removed all doubt, but jacked up the cost in the retelling.

The pejorative language underscores the Express view: “Families were facing the prospect of a crippling extra £400 tax bill”, “Taxpayers could be forced to stump up £6 billion”, “The threat of another huge handout comes on the back of the £7 billion doled out to Ireland”, “we could be forced to help” (a lot of forcing goes on in Express land – must be a lot of rhubarb about), and so “There was anger”.

Elsewhere, the reportage showed a lack of accuracy which might have made some journalists wonder, with “Prime Minister José Sócrates ... tried to quit on Wednesday”. Hello Express people – he did quit on Wednesday. And loans are not “handouts”. Plus helping our oldest ally – we and the Portuguese go back to the marriage of Philippa of Lancaster and King John I of Portugal in 1387 – might not be Such A Bad Thing.

This, though, does not deter the Express, which, in a final flourish of inaccuracy, brings in Matthew Sinclair, head non-job holder at the so-called Taxpayers’ Alliance, to open his mouth and gracefully insert boot: “British taxpayers rejected the Euro” sniffs Sinclair, seemingly unaware that British taxpayers have not yet been asked their opinion on the subject.

Thus the final nail in the coffin of yet more substandard hackery. That’ll be another Benchmark of Excellence, then.
Posted by Tim Fenton at 16:38