Express – Budget On A Budget

Budget day is always a good source of copy for the press: anything that changes in the area of taxes and duties is of interest to their readers, there’s plenty of scope for argument and politics, and – the best part – it all happens in Parliament, so it’s not an expensive one to cover.

This last factor may be behind the extensive coverage given over to yesterday’s Budget by the Daily Express, with around twenty stories on the paper’s website right now (Thursday 24 March 0940 hours). But such is the desire to maximise the bang for this particular buck that quality has clearly suffered. 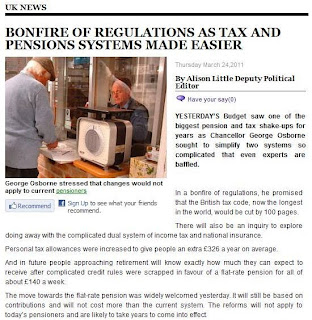 That lack of quality is exemplified by a story titled “Bonfire Of Regulations As Tax And Pensions Systems Made Easier”, under the by-line of Deputy Political Editor Alison Little. Because there hasn’t been a “Bonfire Of Regulations”, and the tax and pensions systems have not been made easier. How can we be so sure? Because Little’s article says so.

At first, it looks like there has indeed been change, as Little declares “Yesterday’s Budget saw [past tense] one of the biggest pension and tax shake-ups for years as Chancellor George Osborne sought to simplify two systems so complicated that even experts are baffled”.

But immediately after this assertion comes “In a bonfire of regulations, he promised that the British tax code ... would be cut by 100 pages”. So there hasn’t been a bonfire, just a promise that there may be a bonfire at some time in the future.

And, as for those two systems, it was also jam tomorrow: “There will also be an enquiry to explore doing away with the complicated dual system of income tax and national insurance”. So no shake-up there, either.

Nor was the assertion “complicated credit rules were scrapped in favour of a flat-rate pension for all of about £140 per week”, as the next paragraph demonstrates: “The move towards the flat-rate pension was widely welcomed yesterday”.

So the headline “Bonfire Of Regulations As Tax And Pensions Systems Made Easier” is fraudulent: there hasn’t been a bonfire, and neither tax nor pensions have been made easier. But the tradition of Phil Space journalism has been upheld, with a cheap story spun out to fill yet more column inches.

Thus yet another Benchmark of Excellence.
Posted by Tim Fenton at 10:34