When hacked off hack Richard Peppiatt finally threw in his job with Richard “Dirty” Desmond’s appallingly downmarket Daily Star last week, he confirmed what many had believed for some time: that the Star routinely makes up stories if nothing of factual value is available. 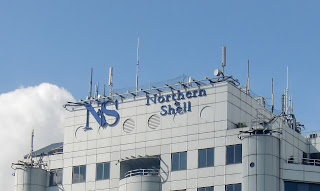 Palace of Please Yourself Printing

Moreover, he told of twisting the facts to fit the story, and of being told “If you won’t write it, we’ll get someone who will”. Well, Dirty Des’ finest have been as good as their word: that there is always someone who will write what is required has been shown to excellent effect by a piece under the joint by-line of John Ingham and Mark Howarth in the Express.

As with Muslim bashing in the Star, the anti-EU content in the Express is relentless: the article concerned, “Electric Cars To Power UK? Lunatic!”, gives the verdict in the title, and the villain is of course “EU Chiefs”. But one concern immediately enters: this story is not in the Daily Mail or Maily Telegraph, who might be expected to jump on anything that can be portrayed as Euro lunacy.

The reason for this apparent exclusive is that it isn’t really an exclusive at all. In fact, it’s not really a story: what Des’ hacks have done is to take an Opinion paper from the European Economic And Social Committee – that’s a briefing or discussion note in plain English – and selectively quoted from one paragraph of it.

The paper concerned was published on February 11 this year (available on line HERE), and the Express has picked its quotes from Paragraph 4.4 (at right, foot of third page down). A read through of the paper shows that it is looking at the wider adoption of Electric Vehicles, the challenges that will have to be met in that adoption, and what the future energy landscape might look like.

In other words, it is looking at what might happen when the oil starts to run out, and the idea of using an electric car’s battery for domestic power is already being explored by the private sector (sample articles HERE and HERE).

That’s the kind of responsible thing that might be expected: to consider all the possibilities and not get caught out as events unfold. But that does not fit the Express agenda, so Des’ hacks twist the facts to suit their routine Euro-bashing.

And it’s routinely bad journalism. That’ll be another Benchmark of Excellence, then.
Posted by Tim Fenton at 10:26