Express – Making Up The Front Page

The “campaign” by Richard “Dirty” Desmond’s increasingly downmarket Express titles for the UK to leave the European Union (EU) is incessant – if laughably ineffective and stuffed with the dodgiest of figures. Today’s front page brings a superb example of the genre, with the screaming headline “Scandal of EU Medical Perks”. 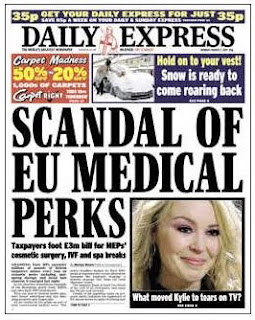 The hyperbole meter is cranked up to the max, with a raft of pejorative language: “Grasping ... squander ... scandalous ... European gravy train ... appalling waste ... juggernaut of EU excess”. The usual array of rentaquotes is also deployed: the so-called Taxpayers’ Alliance (medical perks not disclosed), the anti-EU lobby group Open Europe, and a supposedly independent MEP, of whom more later.

So what is the “scandal” about? Well, it seems that MEPs are part of a health and accident insurance scheme – in other words, it’s not just about healthcare, and is done differently to the UK’s NHS. The total budget for MEPs and their families is £2.9 million: there are 736 MEPs, so if each one has a family of four, this works out at around £1,000 per person per annum.

And here we see the Express getting its figures wrong: their article states “millions of pounds of British taxpayers’ money every year”, but with around 10% of MEPs coming from the UK, that makes £290,000 annually, so the paper is being dishonest. The treatments covered often mirror the NHS: IVF treatment, slimming products, treatment for impotence, drug rehabilitation, breast reduction, and, yes, complementary therapy, are all available to anyone in the UK.

Moreover, when the cost of this scheme is put alongside that of the NHS, the Express line appears plain desperate: the cost of our own national provider, for 2008-9, equates to just under £2,000 for every UK resident. That’s around twice the cost of the scheme for MEPs.

Also, the Express’ desperation extends to its talking heads: the “independent MEP” already mentioned, Nikki Sinclaire, was elected on the UKIP ticket but has since been booted out of that party.

And this supposedly front page news is not a new story: it was run by the Sunday Times and Mail On Sunday – yesterday. So it’s second-hand news, full of selective and pejorative language, and the figures don’t back it up.

No change there, then. Another “Benchmark of Excellence” for Dirty Des.
Posted by Tim Fenton at 11:13