Another day, another example of what former Daily Star man Richard Peppiatt was driving at in his now legendary resignation letter to Richard “Dirty” Desmond. Today’s Daily Express contains a piece not merely of fabrication, but also reeking of paranoia: under the headline “Liberal Democrats’ Secret Plot Is Revealed”, no plot is proved and therefore is not revealed, but the Euro-frightening is in full-on mode. 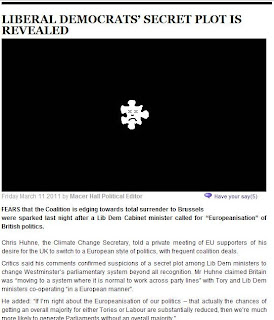 Just because Europe isn't out to get you ...

This flagrantly untrue assertion is made by Macer Hall, who claims to be the paper’s Political Editor: this person is unlikely to be replacing Nick Robinson, or moving to a credible job at a proper newspaper, any time soon.

The article takes a statement by Lib Dem minister Chris Huhne – where he talks of “a system where it is normal to work across party lines ... in a European manner”, and calls this “the Europeanisation of our politics”. Well, there are Governments around Europe that involve coalitions – as in Germany – so it’s an interesting and apparently unthreatening discussion topic.

But not by the time it gets into the Express: Hall tells the paper’s dwindling band of readers “Fears that the Coalition is edging towards a total surrender to Brussels were sparked last night”, although the only comment that is cited in support is a generalised snark against the Lib Dems on the Alternative Vote (AV) from Matthew “Gromit” Elliott of, coincidentally, the No2AV campaign.

Not surprisingly, the Daily Mail has not bothered with this angle, despite its impeccable Euro-bashing pedigree. That may be because this level of story fabrication is beyond even the legendarily foul mouthed Paul Dacre.

For some value of "excellence" ...
And I’m sure that Richard “Dirty” Desmond had no involvement in the exercise. After all, he doesn’t interfere in the running of his papers. We know this because he said so in court. On oath.
Posted by Tim Fenton at 18:13