The situation in Libya, by all accounts, is bad and getting worse. Many of the country’s citizens have moved themselves across the border to Tunisia and Egypt, which is understandable, given the routinely vicious behaviour of Muammar Gaddafi and those still loyal to him.

So how does the Express, the self appointed “greatest newspaper”, see events? Are they concerned about the stability of the wider region? Perhaps they are focusing on a possible no-fly zone, or more wide ranging sanctions against the Government in Tripoli? 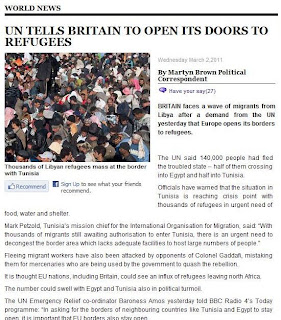 Well, no: the first instinct of Richard “Dirty” Desmond’s hacks is to run an immigrant scare story. The piece, attributed to “Martyn Brown Political Correspondent” (another example of missing punctuation failing to turn its author into Keynes), begins with the fraudulent assertion “UN Tells Britain To Open Its Doors To Refugees”.

This is emphasised by also asserting “It is thought [my emphasis] EU nations, including Britain, could see an influx of refugees leaving north Africa”. Sadly, Brown’s word power does not extend to his telling where these refugees will go after leaving the region, but the implication is clear.

Yes, they’re Muslims, Arabs, they’re all coming here, and we have to be not only scared – because Muslims are scary people when they’re in the Express – but appalled because the dastardly UN is telling us to let them in.

Except that Baroness Amos, the UN Emergency Relief coordinator, has not said anything of the sort. She has merely said that borders should stay open. But for the Express, the leap from that to a horror story featuring tens of thousands of Muslims all coming to the UK is not a difficult one.

At least the paper doesn’t have the likes of Fat Dick Littlejohn, with his attempted humour, which in this case will see anyone fleeing Gaddafi awarded a stay in a four star hotel, lots of benefits, and no doubt a free car. Be afraid of Muslims, tabloid readers. Be very afraid – and keep buying your papers.
Posted by Tim Fenton at 18:27