Making It Up – What A Star

I rarely check out the supposed “news” from Richard “Dirty” Desmond’s relentlessly downmarket Daily Star, because there is so little of it, except of course for the latest on Katie Price, coverage of reality TV, and plugs for the rest of Des’ empire.

Typifying the news content today has been a scare story ticking the kinds of boxes that will no doubt appeal to Star readers: this one has a tsunami (caused by either an earthquake or a volcanic eruption), then very big waves, and finally nuclear power stations. The problem is that, as any observer of the Desmond press will suspect at the outset, much of it is made up. 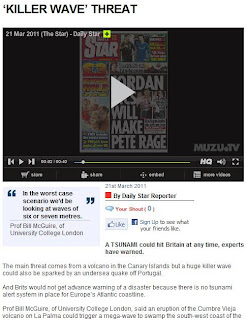 “’Killer Wave’ Threat” screams the headline. But it’s very old news: this is about the possible consequences from an eruption and subsequent collapse of part of the Cumbre Vieja volcano on the Canary island of La Palma. The vulcanologist Bill McGuire, who is quoted in the piece, helped to produce a BBC Horizon documentary on Cumbre Vieja, but back in 2000.

In any case, the area that would be worst affected from the possible (McGuire’s view is not universally held) mega-tsunami from a collapse of the volcano would be the eastern seaboard of the USA: even the Star concedes that the south western UK would see waves no more than six or seven metres.

As to the idea that nuclear power plants might be hit, here we have a problem: the south west coast of the UK doesn’t have any.

And the scenario of an undersea earthquake off Portugal, the other idea floated by “Daily Star Reporter”, sounds very much like the event that hit Lisbon – but back in 1755.

It doesn’t seem to matter which Desmond paper it is, the “Benchmark of Excellence” is set uniformly low.
Posted by Tim Fenton at 16:43

There are two nuclear power station in the South West. One is at Oldbury. It is due to be decommissioned, but the site is also on the list of potential new reactor locations. The other is Hinkley Point B.

Also, while Dungeness, Wylfa, Heysham and Hunterton are all a bit further away, they are all right by the South or West coasts and only a few feet above sea level.

The Star is rubbish, but as sensationalist as the article is, it is not as erroneous as you claim.

@1, Oldbury and Hinkley B are on the Bristol Channel, not the South West coast. And you mean Hunterston (Hunterston B, even).

Dungeness B, Wylfa, and the two stations at Heysham would be unlikely to take a direct hit from a potential tsunami from Cumbre Vieja, as it would break up after making first landfall.

But thanks for giving me a prod!