There are local elections coming up in May, and as I noted earlier, those in Cheshire East (which includes Crewe) are “all up”: every seat is being contested. In Crewe’s St John’s ward, that means Lib Dems Betty Howell and David Cannon have to seek a new mandate from an increasingly sceptical electorate.

So the presentation of the latest Lib Dem Focus leaflet, on the trademark yellow paper, should come as no surprise in the way it lays into local Tories while praising the “Coalition Government” and blaming Labour for whatever it can. 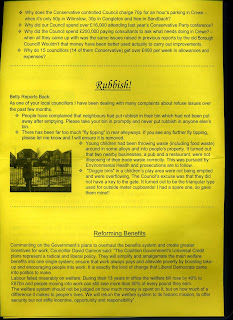 This is the second of four pages from the leaflet: at the top of the page, the attack on the Tory controlled Cheshire East Council could have come from the so-called Taxpayers’ Alliance, with questions like “Why did our Council spend over £16,000 attending last year’s Conservative Party conference?” and “Why do 15 councillors (14 of them Conservative) get over £400 per week in allowances and expenses?”.

But then, further down the page comes praise for reform of the benefits system, although no credit is given to the architect of that reform, as Iain Duncan Smith is of course a Tory. Instead, the proposed change to a “universal credit” is lauded as “a radical and liberal policy”.

And, just to make sure the Lib Dems’ main challengers next May do not escape criticism, they tell that “Labour failed miserably on welfare”. At the last local election, the top six in the poll were three Lib Dem and three Labour candidates, with the top three gaining seats.

This was at a time when Labour was deeply unpopular, yet that party still retained one of the three seats, with the Tories nowhere. I’m expecting more of the same from Betty Howell and David Cannon in the next two months.
Posted by Tim Fenton at 17:11