The Futility Of Auntie’s Appeasement

For the BBC, there appears little that it can do to deflect the incessant generation of knocking copy from parts of the generally right leaning print media, yet there was another clear attempt this morning to use The Andrew Marr Show as a vehicle for appeasement. The paper being appeased was the Mail, and the attempt didn’t work.

Marr opens his Sunday morning show with a review of the papers, and there are some reviewers who appear more regularly than others. This morning brought two of the more regular attendees, and both are in the service of the legendarily foul mouthed Paul Dacre: failed Tory leader’s spin doctor Amanda “Glenda” Platell, and self-styled liberator of Port Stanley Max “Hitler” Hastings. 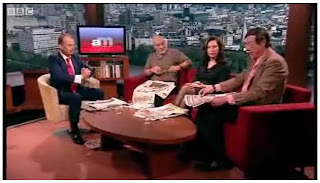 View of the Dacre Anschluss

True, the sofa was also host to actor Patrick Stewart, who, it was stressed more than once, is a Labour Party supporter, but he is not a professional politician or hack. It was as if the Daily Mail had been invited into the BBC to pass judgment on the whole of the Fourth Estate, and with very little featuring of dissent.

And little good it did them: one look at the Mail’s coverage of yesterday’s anti-cuts rally reveals that the Beeb-bashing is being dutifully churned out to order. At the head of the cab-rank, and thus devaluing his credibility and compromising his independence, was Peter Hitchens, whose name appears under the headline “The biased BBC ... marching alongside their anti-cut [sic] allies”.

Hitchens then links the TUC and BBC, showing that his inventiveness, at least, is intact: “the BBC took sides on the TUC protest, even before it had begun. The Corporation and the TUC instinctively recognise each other as allies. Both depend on public money” he thundered. A photo of a policeman spattered with paint is then shown, to suggest some connection with the fringe violence without actually having to make a statement to that effect. 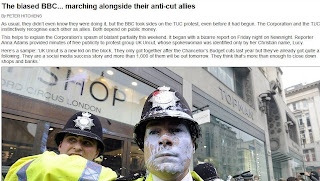 Not that they're trying to link Beeb and violence ...

Then, alongside a photo of a smoke flare being thrown (not that the Mail wants to link the BBC to that, of course), Hitchens continues his tirade: “The atmosphere of much of [the] coverage was what might have been found in a Left-wing London household as Granny got out her old Aldermaston marching shoes, the head of the household dusted off his anti-Thatcher placards and the children dressed excitedly for their first demo”.

BBC management would do well to reflect on such coverage, and note that, whatever the size and frequency of the bone offerings they make to this particular dog, its hostility towards them is not going to diminish. The rest of us might, meanwhile, count ourselves lucky that the mingling of news and comment pieces has not yet escaped from the print media into the broadcast one, so we are thus far spared the likes of Fox News Channel (fair and balanced my arse).
Posted by Tim Fenton at 12:01