Express - So Late It Missed The Boat

As I’ve pointed out more than once, the Daily Express has a circulation nowadays that is only a fraction of what it achieved in its heyday. So when Richard “Dirty” Desmond’s diminishing band of hacks lays claim to a campaign victory, the thought occurs that there may be a little exaggeration at work.

This is typified by today’s front page: while the aftermath of the Japanese earthquake and tsunami, together with events at the Fukushima Daiichi nuclear power complex, occupy much of the Fourth Estate, the Express majors on a reduction in mobile phone charges which it then claims is due to their campaign. 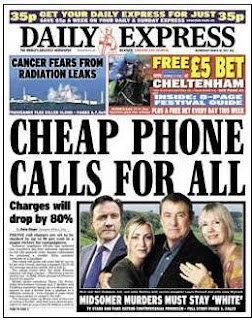 The reduction is in the cost of calls from land line phones to mobiles: the charge concerned is called the “termination rate”, in other words, what mobile operators charge for a call to be terminated at a mobile phone, rather than a conventionally connected one. That Ofcom has ordered a reduction in this charge is not in doubt.

However, the contribution of the Express is more problematic: the Guardian article does not mention the campaign, and neither does a similar piece in the Maily Telegraph. And nor does the report in the Daily Mail. But there has been a campaign, hasn’t there?

Well, yes there has, and it’s called Terminate The Rate. And it has been supported by a number of organisations: Three, BT, MoneySupermarket.com, the Federation of Small Businesses (FSB), the Post Office, and trade unions Unite and GMB are among the supporters listed.

But, as that list of supporters scrolls past, one name missing is the Express. And no, parent company Northern & Shell is not listed either. So much for the Express running any kind of campaign – they haven’t even bothered to join the official supporters.

That’ll be another Benchmark Of Excellence, then.
Posted by Tim Fenton at 16:29