Calm Down, It’s Only A Survey

Another day, another Express EU frightener, and another froth of hyperbole blown up from very little substance: “MPs Gagged Over Brussels Power Grab” thunders the headline this time. So has there been a “power grab”, and have MPs been “gagged”? The answer, as with so much from this paper, is no, and no.

Moreover, the assertion that “sweeping powers for Eurocrats to meddle in Britain’s economy were nodded through Parliament without a vote” is not just scaremongering, but plain wrong. No powers were “nodded through”, and so there will be no “meddling”. 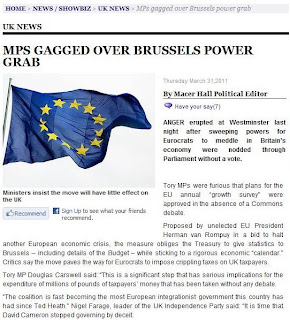 But there must be some kernel of fact to this piece, mustn’t there? Well, there is a kernel, but it’s a very small one: what Express political editor Macer Hall is trying to convert into a proper story is the EU Annual Growth Survey (you can see the relevant document HERE [.pdf]). And be warned – it’s not the most stimulating read.

So all the ranting is over a mere survey. But Hall is determined to wring every last ounce (not gramme, please, not at the Express) out of the discovery, and so there has to be an “unelected” person speaking foreign who can be demonised along the way. Hall is clearly untroubled by the thought that the so-called Taxpayers’ Alliance, relied on by the Express for its rent-a-quotery, is equally “unelected”.

Wait a moment, though, what about the “anger” that “erupted at Westminster”, along with the “furious” Tory MPs? Sadly, the Express could find only one such MP, Douglas “Kamikaze” Carswell, not someone normally associated with the Tory mainstream: its other talking head was Nigel “Thirsty” Farage from UKIP. Yes, no Philip Davies, and no Mark “Reckless” Reckless either.

And what does this survey entail? To quote the Express, it means that the UK is “obliged to give statistics to Brussels – including details of the Budget”. Er, hello Express people? That would be the kind of thing that has been plastered all over the rest of the papers for the past week. We’re not exactly talking national secrets here.

Getting gullible readers to pay money for this drivel? That’ll be another Benchmark Of Excellence.

[Note also that at the Express, the “News” and “Showbiz” categories appear to be interchangeable]
Posted by Tim Fenton at 12:28

I'm glad there are others offended by the mediocracy, laziness and selfish xeonphobia of this rag