Public transport is something with which the legendarily foul mouthed Paul Dacre does not trouble himself: he is routinely chauffeured from home to City apartment to office and back. So he has no means of knowing when his hacks make a surprise discovery on the subject, or whether they are just recycling another press release.

This was underlined by a piece in today’s Daily Mail laying into train operator South West Trains (SWT) who operate services out of London’s Waterloo terminus. Under the by-line of Emily Andrews is an apparent discovery that some of SWT’s fleet has interiors that seat five across the coach. 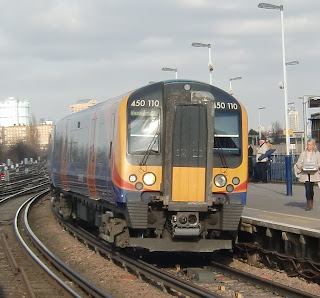 But it’s not a new practice, so no discovery has been made: all that Dacre’s hacks are doing is allowing self promoting Tory MP Penny Mordaunt to complain about the use of trains with “three by two” seating on SWT’s services between London and her constituency town of Portsmouth.

SWT did this as part of a reshuffle of their fleet, which enabled them to outbid rivals and obtain a renewal of their franchise. So Ms Mordaunt and her supporters at the Daily Mail should be grumbling at the Government, and the way that rail franchises are won and retained, rather than shooting the messenger.

Moreover, when the piece tells that “Regular carriages have only two seats either side of the aisle”, this too shows ignorance of many passengers’ travelling environment. Trains with “three by two” seating have been around for decades (like since World War 2, and maybe before), including on the London to Portsmouth line – the only difference being that they now turn up on almost all services. 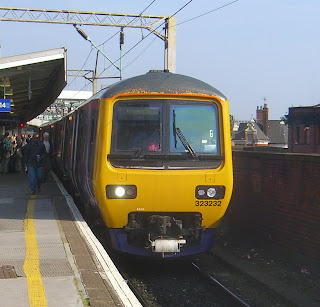 A 3+2 seated electric set in Manchester
And that kind of seating density is familiar not only to SWT’s commuters, but rail travellers outside London. Diesel and electric powered trains so equipped work in and around the West Midlands, West and South Yorkshire, Merseyside and Greater Manchester, some on journeys that take far longer than the 90 minutes of Waterloo to Portsmouth. 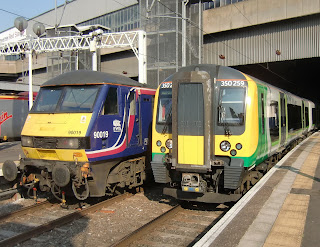 London Midland: another Desiro, also 3+2
How much longer? Well, when operator London Midland put one of their newer electric sets – with the same interior as the SWT ones that feature in the Mail story – on a London to Crewe service, that’s a journey that takes twice as long as the one Ms Mordaunt is complaining about. 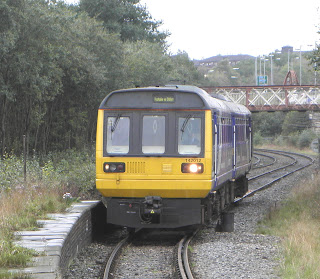 There's always the bus bodied 3+2 Pacer, too
Is that unique? Well, no: Leeds to Morecambe, Manchester to Sheffield, Manchester to Blackpool, or Newcastle to Carlisle can also be had on “three by two” seated trains. Liverpool to Birmingham, too, is on occasion so favoured. But all of these are outside London, and have not come to the notice of the Dacre hackery or a self publicising MP.
And that’s all there is to it.
Posted by Tim Fenton at 16:36