Before his retirement from the editor’s chair at the Daily Express, Peter Hill conceded that the paper ran a lot of stories on the EU, but noted that this was good for sales. So the appearance of yet another Euro-frightener on today’s front page should come as no surprise: it’s a cheap way of interesting readers. It’s also short on those pesky things called facts. 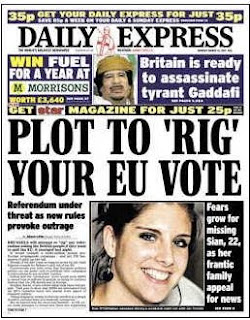 Warning: may activate your BS detector

The story, under the by-line of Alison Little, is almost entirely a mix of conjecture and outright fabrication. The level of veracity is set by the first statement: “Brussels will attempt to ‘rig’ any referendum asking the British people if they want to quit the EU”. This is invention, with no facts to back it up.

It continues “It would unleash a multi-million pound pro-Europe propaganda campaign – and get UK taxpayers to pick up the bill”. Action invented, sums invented, taxpayer involvement – you guessed it – invented. Next? “Details of the plot came”. There is no plot, so there are no details. 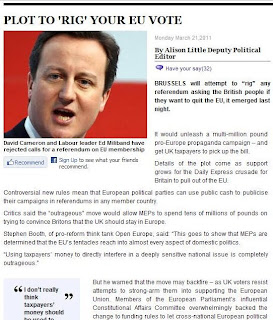 Is there a factoid in the house?

But there must be some substance to the piece, mustn’t there? Sadly, very little, as the next statement shows: “Controversial new rules mean that European political parties can use public cash to publicise their campaigns in referendums in any member country”. There aren’t any new rules, so this, too, is invention.

So what is the source for this latest Express scare story? Ah well. The European Parliament’s Committee on Constitutional Affairs has just published a Draft Report (see it HERE) on “the regulations governing political parties at European level and the rules regarding their funding”.

As it is only a draft report, it gives no powers to do anything, it codifies no rules, and the likelihood of its being adopted any time soon is slim. Moreover, the funding amounts can be gauged by the limits on party donations of 25k Euro, rather than the “multi-million pound” invention of the Express.

And this is all about political parties that may at some future time exist at a European level. Given that it has been over half a century since the signing of the Treaty Of Rome, and that there are no significant Europe-wide parties (with the possible exception of the Greens), it might be obvious that this draft report is more of a “what if” document.

Thus the Express article is in the same category as the Euro-frightener on electric cars: baseless speculation and demonising. That’ll be another Benchmark of Excellence, then.
Posted by Tim Fenton at 12:03