A while back, I noted that the Madeleine McCann story had briefly burst back into life, but that the empire of Richard “Dirty” Desmond, which had been so eager to talk about the toddler’s disappearance before being taken to the cleaners by her parents, had not mentioned the new news – at all.

But today, the Express has decided to rectify the earlier omission by running a piece about Kate McCann’s upcoming new book on her still missing daughter. Sad to say, the instantly memorable quality of the article is not Kate or Maddie, but yet another horrendous grammatical howler of the kind I highlighted recently. 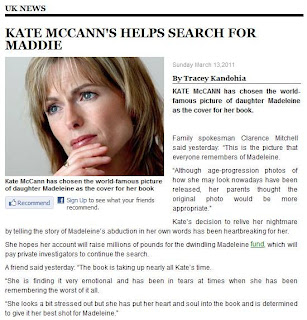 Simples. Almost all those sub-editors, who would have checked copy in the days when the Express was a credible newspaper, have been sent down the road. The remaining hacks have to input their stories direct and hope that what little “subbing” still takes place will catch any mistakes.

And there is another problem with this piece. It begins “Kate McCann has chosen the world-famous picture of daughter Madeleine as the cover for her book”, but that picture does not appear. So perhaps this is another howler that a sub-editor would have picked up.

The only credible alternative is that the Express was unable to use that “world-famous” photo, for which there are two possible explanations. Either the Desmond press has been forbidden from using it, or the copyright owner has demanded a fee for its reproduction – and the Express is too tight to stump up.

Either way, it merely contributes to yet more unacceptably bad journalism. So that’s another “Benchmark Of Excellence”, then.
Posted by Tim Fenton at 11:23