Julian Smith, who has for some reason been appointed as chief whip by the Tories, has significant previous when it comes to acts of stupidity: his idea that “As part of its reporting of national security issues, The Guardian has not denied sending the detailed family and personal information of our security agents across borders” was typical. The Guardian’s editor had not denied being Fred West’s patio-building accomplice, either. 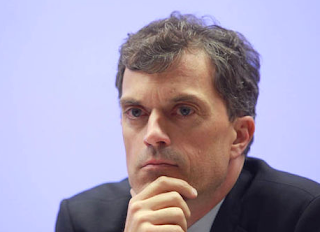 So it should have come as no surprise when Smith attempted to be jolly clever over this week’s close votes in the Commons, only to be caught with his trousers well alight amid calls for him to resign. His deception concerned pairing, and specifically the pairing of some Tory MPs with MPs from Labour and the Lib Dems who were absent from Parliament because they were in the later stages of pregnancy. 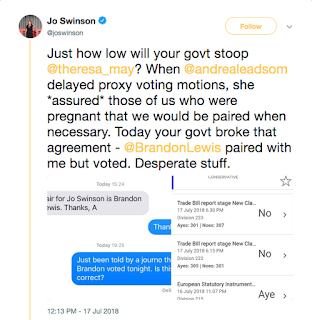 Those MPs could not vote; their Tory pairs would also not vote, even though they may be in Parliament at the time. One of the Tory pairs was party chairman Brandon Lewis, who was paired with Lib Dem Jo Swinson. Lewis voted twice on Monday evening. Ms Swinson was unimpressed. “Just how low will your govt stoop @theresa_may? When @andrealeadsom delayed proxy voting motions, she *assured* those of us who were pregnant that we would be paired when necessary. Today your govt broke that agreement - @BrandonLewis paired with me but voted. Desperate stuff”. 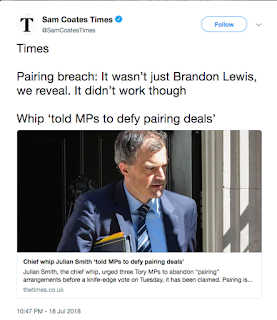 Times deputy political editor Sam Coates then claimed that Smith had “told MPs to defy pairing deals”: “Mr Smith summoned Brandon Lewis, the Tory chairman, from a meeting to Parliament as a crunch vote on customs approached, witnesses claim … The chief whip is understood to have told Mr Lewis that the later votes were going to be close and he needed him to vote. This breached the pairing deal with Jo Swinson … The Times has been told of two other Tory MPs told by Mr Smith that they should vote”. 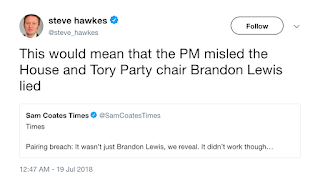 What that meant was spelt out by the Sun’s deputy political editor Steve Hawkes. “This would mean that the PM misled the House and Tory Party chair Brandon Lewis lied”. 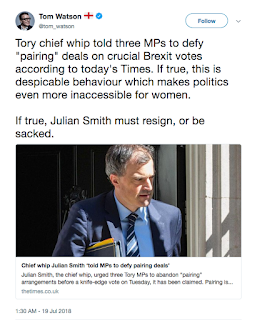 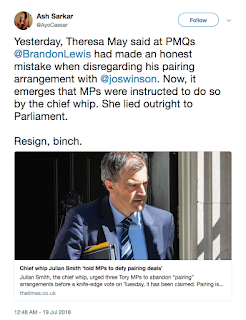 “Yesterday, Theresa May said at PMQs @BrandonLewis had made an honest mistake when disregarding his pairing arrangement with @joswinson. Now, it emerges that MPs were instructed to do so by the chief whip. She lied outright to Parliament. Resign”. 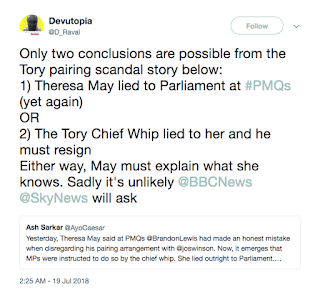 The Tweeter known as Devutopia was on the same page. “Only two conclusions are possible from the Tory pairing scandal story below: 1) Theresa May lied to Parliament at #PMQs (yet again) OR 2) The Tory Chief Whip lied to her and he must resign Either way, May must explain what she knows”. Dead right she must. 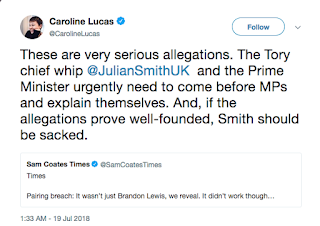 Green Party co-leader Caroline Lucas concurred. “These are very serious allegations. The Tory chief whip @JulianSmithUK and the Prime Minister urgently need to come before MPs and explain themselves. And, if the allegations prove well-founded, Smith should be sacked”. This shaky Government just got a whole lot shakier.
Posted by Tim Fenton at 12:41

No doubt after she quits and there is a coronation of the annointed one we will all be told how things are better now.