Now is perhaps not the time for the more clueless Brexiteers to wade clumsily into the debate on the subject and get it totally wrong, but this is a thought that Vauxhall’s semi-detached Labour MP Kate Hoey, firm friends with former UKIP Oberscheissenführer Nigel “Thirsty” Farage, has not allowed to enter as she goes after Donald Tusk, who is President of the European Council. Tusk had been observing the latest Brexit chaos. 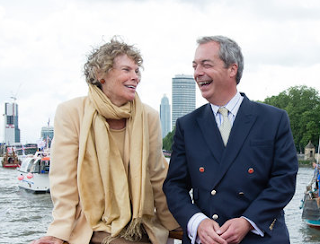 “Politicians come and go, but the problems they have created for people remain. I can only regret that the idea of #Brexit has not left with Davis and Johnson. But...who knows?” he mused after David Davis finally woke up and resigned, to be followed soon afterwards by London’s formerly very occasional Mayor Alexander Boris de Pfeffel Johnson. 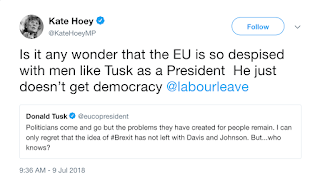 Ms Hoey was most unhappy at another of those ghastly foreigners sticking his bugle in our home-grown political idiocy. How dare the President of the European Council try and impose such outlandish things as a common sense discussion on us? So off she went: “Is it any wonder that the EU is so despised with men like Tusk as a President He just doesn’t get democracy”. Actually, I think he gets it rather well. 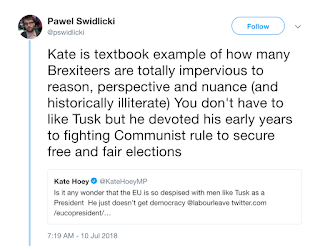 Pawel Swiclicki was first to make the all too obvious point. “Kate is [a] textbook example of how many Brexiteers are totally impervious to reason, perspective and nuance (and historically illiterate). You don't have to like Tusk, but he devoted his early years to fighting Communist rule to secure free and fair elections”. Quite. 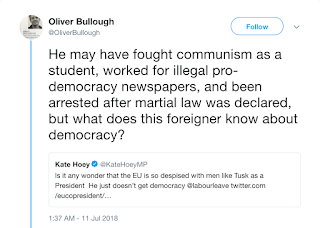 Oliver Bullough made a similar point. “He may have fought communism as a student, worked for illegal pro-democracy newspapers, and been arrested after martial law was declared, but what does this foreigner know about democracy?” One snippet from Tusk’s Wikipedia entry hints at Ms Hoey’s problem: “Tusk credits his interest in politics to watching clashes between striking workers and riot police when he was a teenager … He enrolled at the University of Gdańsk to study history, and graduated in 1980 … While studying, he was active in the Student Committee of Solidarity, a group that opposed Poland's communist rule at the time”. Solidarity. You know, like Lech Walesa. 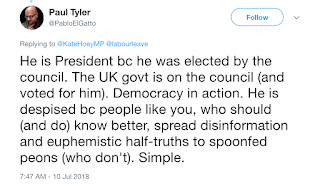 As to Tusk’s democratic legitimacy, Paul Tyler was on hand to put Ms Hoey straight. “He is President [because] he was elected by the council. The UK [Government] is on the council (and voted for him). Democracy in action. He is despised [because] people like you, who should (and do) know better, spread disinformation and euphemistic half-truths to spoonfed peons (who don't). Simple”. Not doing too well here, is she?

She was doing even less well when Emma Kennedy pointed out that Ms Hoey is the last one to talk Brexit and call on others for not getting democracy. “Neither do you. Your constituency voted 70% Remain”. So that’s a failure on every conceivable front for the clueless Labour Leave member and Faragista fan, then.

Kate Hoey is the one who doesn’t get democracy. Maybe her local CLP can help her understand the concept a little more fully.
Posted by Tim Fenton at 17:58

It's a waste of time trying to reason with Brexiteers, they blinded by their ignorance, prejudices and bigotry about the EU.

Don't waste ur breath on debating with them. Best thing we could do is help those who voted Brexit to move to a small island in the middle of nowhere to fend for themselves and see how long they last before they come screaming for help.

Tusk "...credits his interest in politics to watching clashes between striking workers and riot police when he was a teenager..."?

Christ, we could do with him here. Especially if he helps get rid of the likes of Benn, Umunna and Mann from the Labour Party.

I am sure you get the picture.