Links between the gangster régime of Vladimir Vladimirovich Putin and the Leave campaigns in the 2016 EU referendum are well-known - well, for one of those campaigns, at least. Leave EU, along with its principals Arron Banks and Andy Wigmore, had all those meetings with the Russian ambassador. There were offers of shares in business deals. But that was as far as Kremlin involvement went. 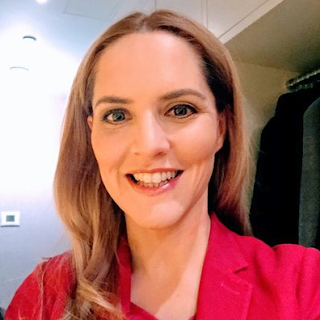 Or rather, that is the real world version of events. In the parallel universe inhabited by (thankfully) former Tory MP Louise Mensch, Vote Leave were at it too. And so was the EU. Such is her detachment from reality that the first mention of tradecraft, safe houses, dead letter boxes, moles, ferrets, sleeper cells, burning targets, legends, or Special Directorates of Moscow Centre sends her off into her own wacko world of espionage. 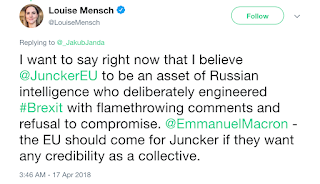 Just how wacko that world has become was demonstrated in April when Ms Mensch claimed “I want to say right now that I believe @JunckerEU to be an asset of Russian intelligence who deliberately engineered #Brexit with flamethrowing comments and refusal to compromise. @EmmanuelMacron - the EU should come for Juncker if they want any credibility as a collective”. Like Monsieur le Président is going to read that rubbish. 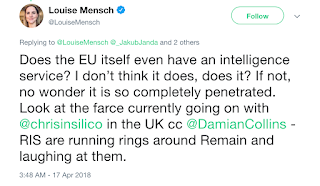 There was more. “Does the EU itself even have an intelligence service? I don’t think it does, does it? If not, no wonder it is so completely penetrated. Look at the farce currently going on with @chrisinsilico in the UK cc @DamianCollins - RIS are running rings around Remain and laughing at them”. Yes, an intelligence service that does not exist has been completely penetrated. We have a mole, Jim. Wibble. 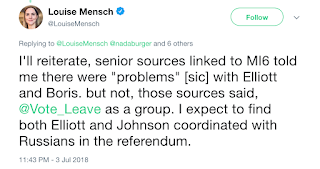 So when the subject turned to London’s formerly very occasional Mayor Alexander Boris de Pfeffel Johnson, she was already, shall we say, a little bit Out There. Hence “I'll reiterate, senior sources linked to MI6 told me there were ‘problems’ [sic] with Elliott and Boris. but not, those sources said, @Vote_Leave as a group. I expect to find both Elliott and Johnson coordinated with Russians in the referendum”. Wibble again. 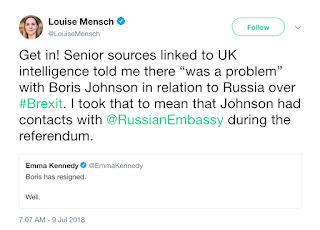 Then Bozza resigned. “Get in! Senior sources linked to UK intelligence told me there ‘was a problem’ with Boris Johnson in relation to Russia over #Brexit. I took that to mean that Johnson had contacts with @RussianEmbassy during the referendum”. Where do these “sources” come from? Who knows? And, indeed, who cares? 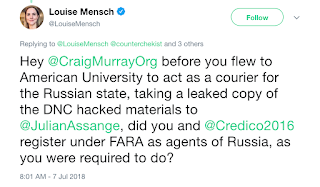 Ms Mensch’s tendency to just make it up also extended to seriously wacko claims about former diplomat Craig Murray. “Hey @CraigMurrayOrg before you flew to American University to act as a courier for the Russian state, taking a leaked copy of the DNC hacked materials to @JulianAssange, did you and @Credico2016 register under FARA as agents of Russia, as you were required to do?” Er, WHAT? And there was more.

“You didn’t think @GCHQ knew you and @CraigMurrayOrg were couriering that copy to @julianAssange? You didn’t think we were in his computer? Are you insane?” Now you know the level of delusion at which she operates. Now back to Bozza. 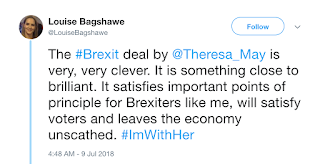 After telling the world “The #Brexit deal by @Theresa_May is very, very clever. It is something close to brilliant. It satisfies important points of principle for Brexiters like me, will satisfy voters and leaves the economy unscathed” - note that there is also a Louise Bagshawe Twitter account, so she can talk to herself in public - came her take on Bozza going. “No. Actually, I’m just letting @BorisJohnson know myself that MI6 are all over his meetings with Russians over Brexit, so don’t bother getting any ideas”. 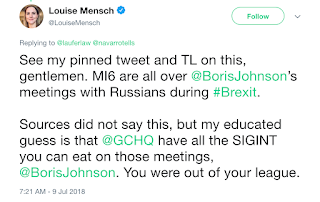 Of course they are. Would Madam care to dig herself in a little deeper? “See my pinned tweet and TL on this, gentlemen. MI6 are all over @BorisJohnson’s meetings with Russians during #Brexit. Sources did not say this, but my educated guess is that @GCHQ have all the SIGINT you can eat on those meetings, @BorisJohnson. You were out of your league”. What do they put in the water in reassuringly expensive Manhattan? 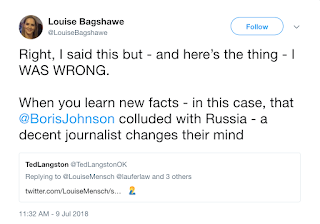 Finally, it was back to the Louise Bagshawe account for the tailpiece. “Right, I said this but - and here’s the thing - I WAS WRONG. When you learn new facts - in this case, that @BorisJohnson colluded with Russia - a decent journalist changes their mind”. When a decent journalist sees that rubbish, they move very quickly in the direction of away.

Louise Mensch is away with the fairies. No surprise there, then.
Posted by Tim Fenton at 12:31

I've seen better reasoning and more considered arguments presented by school-kids. And this airhead has a "literary" background?
Doesn't do journalism any favours.
Thick on a stick.

Don't see the problem with Putin.

Since every major Western power is owned by oligarch bankers, administered by far right civil servants, indulges illegal mass murder wars and destruction of weaker countries, ignores or encourages organised crime and fraud/money laundering, runs "intelligence" services which even infiltrate innocent environmental groups, has a large core of demonstrably corrupt right wing politicians, is institutionally racist, owns mainstream media which are little more than lie machines, and which regularly loots from and impoverishes large swathes of its people......Putin should fit right in with your modular Western president, prime minister or chancellor.

Welcome to gulag capitalism, Vladimir. You finally made it. You're One Of Them.

Does she still think "we hold all the cards" as she said on QT.

I also remember David Davis was her choice for Brexit chief "nothing will get past him" apparently........

She might have a 'literary background' but I would go so far as to claim that she is positively surreal and unpublishable. Shows what happens when you try drinking absinthe by the pint before lunch.

She should stick to being a groupie for Metallica, her husband Peter Mensch is their manager.