Alleged journalist Richard Hendron wanted the world to know that he was not a happy bunny: “The @frontlineclub decide to alienate half its membership by facilitating Anti Trump banners being made in the club led by those attending @BylineFest Probably going to cancel my membership to this Alt Left outfit that purports to push the integrity and values of Journaist [sic]” he whined earlier this month. 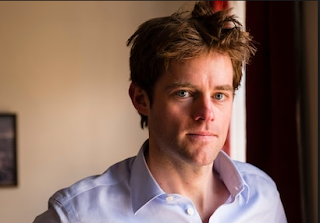 Thus the obedient stance of a good Murdoch poodle: Hendron claims to be employed by the Super Soaraway Currant Bun, where the fantasy of the “Alt Left”, something that does not exist, but which the inmates of the Baby Shard bunker want to exist, is generously indulged. Hendron is clearly an Angry Young Man. And today, his anger has got him, and his piss-poor paper, into a whole load of trouble. 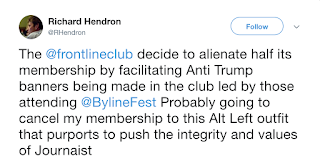 Earlier today, Ash Sarkar, fresh from being shouted down by Piers Morgan, was musing on the current state of social media commentary: “It never ceases to wind me up how much commentary is just drawing facetious parallels between two things you disdain, which are otherwise nothing alike. Now please, let me explain to you about how Iggy Azelia is exactly the same as Christmas pudding”. Or, perhaps, not. 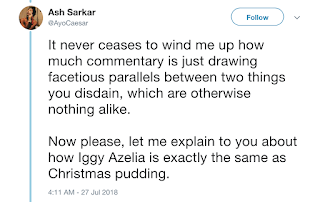 For some reason - not that the Sun is looking to target Ms Sarkar because she made their CEO’s pal Piers look like a jerk, of course - Hendron was looking in. “So you sympathise with grooming gangs then?” he sneered. Er, WHAT?

Having made sure she got a screen grab of Hendron’s mildly wayward Tweet, Ms Sarkar responded “What fun, being a Muslim woman on the internet. I posted a joke about Iggy Azelia and Christmas pud, and this is what I get from a ‘journalist’ from The Sun. You should be embarrassed, mate”. She was right to put “journalist” in quotes. 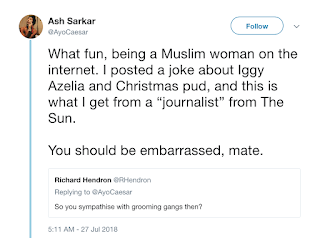 Miqdaad Versi of the Muslim Council of Britain was also in the vicinity, and responded “Appalling & disgusting Islamophobic attack on @AyoCaesar by a person claiming to be a Sun journalist (he does not seem to have done anything recently from a quick search)”. He hasn’t? Bit like most of his Sun colleagues, then. 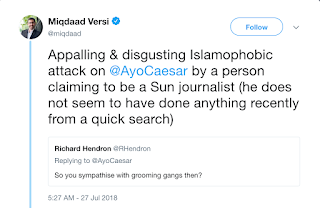 But why would Hendron make such a gratuitous and clumsy intervention? Ah well. Ms Sarkar had by now figured it out, and the “anti Trump” snark suddenly became highly relevant. “Oh wait, I know where I remember him from. @RHendron was one of the pair who got shamed into leaving the Stop Trump party. Nice to know he’ll weaponise racism and insult victims of child sexual abuse to pursue a petty grudge”. 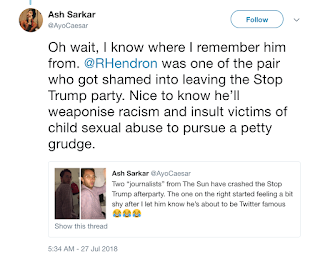 Her original Tweet told “Two ‘journalists’ from The Sun have crashed the Stop Trump afterparty. The one on the right started feeling a bit shy after I let him know he’s about to be Twitter famous”. And “the one on the right” appears to have been Richard Hendron. 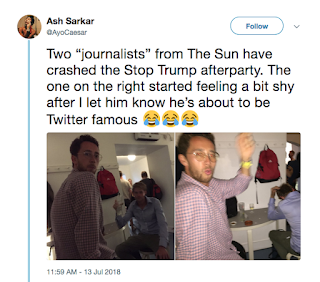 All of which just makes it worse: Hendron is clearly a vindictive creep, whose first thought when faced with the opportunity to get one back on his target is to go all racist and trash victims of child sexual abuse. As Simon Vessey observed, “Take the McDonnell rule on that one. You are either a journalist or you work for The Sun, you can't be both”.

Will he be fired for that outburst? You jest. They’ll probably give the SOB a raise.
Posted by Tim Fenton at 15:40

This journalist is a member of the Bar of England and Wales. Ms Caesar should complain to the Bar Standards Board. Form here. https://www.barstandardsboard.org.uk/media/1935791/180525_-_bsb_guidance_notes_and_complaint_form_gdpr_-_digital_version.pdf

This alleged journalist also put his name forward as UKIP's candidate for the 2016 London mayoral election, ultimately losing out to Peter Whittle.

The Scum office is full of them.