Those who run their own small businesses are not generally regarded as stupid, and certainly not restauranteurs: after all, to be able to deal with taxation authorities, local Government, environmental health operatives, suppliers, and all those customers requires more than a modicum of intelligence. But one such businessman has displayed a quite exceptional degree of stupidity in his off-duty activities.

The restauranteur concerned is called Bill Eve, and he, along with his wife, runs The Bank Restaurant in the Elm Park district of Hornchurch in Essex. This establishment seems to have had a shaky start to life, but had settled down to attract an appreciative clientele - until Eve decided to have a day out in London and his world came crashing down. 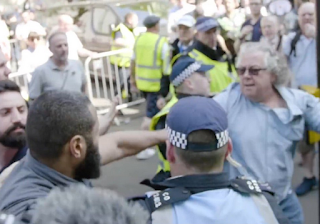 Look who's at the Day For Freedom ...

To understand what might have caused this, the Independent has brought its readers “Tommy Robinson supporter's foul-mouthed, misogynist and Islamophobic rant goes viral”, which covered events at last Saturday’s gathering in support of Stephen Yaxley Lennon, who styles himself Tommy Robinson, which was protesting his prison sentence. 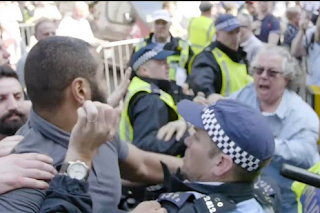 “A foul-mouthed, misogynist and Islamophobic rant at a female journalist has now gone viral on Twitter … The footage, shared by Al Jazeera journalist Sonia Gallego, shows a Tommy Robinson supporter confront her and demand to know who she works for” begins the piece, before telling “The video shows him aggressively asking: ‘Are you with Tommy Robinson or against?’ … When Gallego explains that she's neutral as a journalist for Al Jazeera, he says ‘You're Muslim backed then, aint ya? You’re Muslim-backed’”. 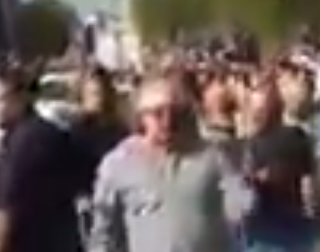 ... bit blurry, but first protest march, looks like him again ...

There was more. “She asks him what he means, to which he responds: ‘Are you f***ing stupid? Are you thick?’ He adds: ‘You know what? You're a slag’”. And then came the identification of the deeply unpleasant protester: it was Bill Eve

It got worse: not only did observers of the protest, along with others, figure that Eve was the owner of The Bank in Honrchurch, further inspection of previous pro-Lennon protests showed that he was a regular. Regular enough to have been caught on camera shouting “Traitor” at officer of the Metropolitan Police. 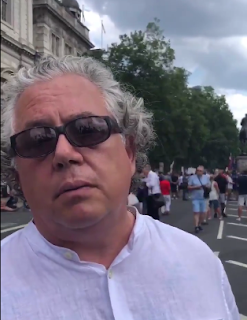 ... and nailed on, abusing a female reporter

Eve was a regular enough Lennon fan to be identified as one of those attempting to attack Mohammed Hijab, friend and colleague of Ali Dawah, who had been invited to speak at the so-called Day For Freedom, but had then been stopped from doing so by Lennon. Dawah’s pal, as I said at the time, “was confronted by a grey-haired man who appeared to be bellowing incoherently at him”. That appears to have been Eve - again. 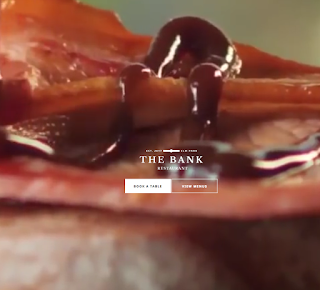 Oh, and guess what they sell at the Bank restaurant?

Small wonder, then, that The Bank’s Facebook page has been taken private, and its Trip Advisor entry now tells “Due to a recent event that has attracted media attention and has caused an influx of review submissions that do not describe a first-hand experience, we have temporarily suspended publishing new reviews for this listing”.

Did Bill Eve think no-one would ID him and connect him to his restaurant? After all those appearances, and his unpleasant abusing of a woman journalist? Perhaps some of his customer base like the idea of eating Chez Bigot. Many more may not.
Posted by Tim Fenton at 16:21

Does Paul Staines live anywhere near Hornchurch? He always looks like he could do with a square meal in a sympathetic environment.

And it seems that The Bank could soon be looking for a rapid bit of rebranding and a new name: something like 'Eve of the Long Knives' perhaps.........

For the sake of the staff he employs I hope nothing untoward happens to the restaurant, but this 'delightful' character needs to be hung out to dry and even prosecuted if the situation warrants it.
Unfortunately having offensive views isn't illegal but being an utter moron should allow him to be publicly ridiculed to the world.

Sorry Anonymous, but having offensive views should never be illegal. No matter how offensive. Down that road is totaltarianism (right or left). The way to deal with idiots like him is to beat him with arguments - which in his case is probably very easy.

A lesson in how to destroy your business in 53 seconds?

He should consider himself lucky that no 'sinister figures'took notice of his behaviour....