When Stephen Yaxley Lennon, who styles himself Tommy Robinson, had his moment of glory at the “Day for freedom” gathering in London’s Whitehall, some wondered who paid for it all. Journalists were told that donations had covered most of the cost - all those supporters, you see. Then, after Lennon was sent to prison after admitting his second contempt of court, came the “Free Tommy” protests. Who had paid for these? The speakers, we were told, had been flown in the cheap seats and put up in inexpensive chain hotels. All that crowdfunding had come to fruition. Except that this never really rang true, and now a far-right group in the USA has not merely owned up to being behind the funding - it has positively boasted about it.

As i News has reported, “while the groups organising the rallies have previously claimed to be self-funded or from donations, a hardline US conservative think tank, Middle East Forum, have said they have actually been funding the demonstrations. In a post on its website last week, the group took responsibility for financing both the Free Tommy Robinson rally on June 9, and the rally on 14 July”. There was more.

“This is the third rally organised since April in support of Robinson. The first, the ‘Day For Freedom‘, was prompted by the far-right figurehead’s ban from Twitter, and saw a variety of street-level activists, right-wing politicians and fascist online provocateurs speak. A number of them also went on to speak at the rally in June”. That was the rally which later turned violent, with attacks on the Police and several arrests. Middle East Forum is the innocuous-sounding name for another anti-Muslim group. As Hope Not Hate has explained, “MEF was founded in 1990 by Daniel Pipes – an influential and ‘respectable’ figure in the American ‘counter-jihad’ milieu – as a neoconservative think tank on Middle Eastern affairs. MEF campaigns against Sharia law and the supposed ‘Islamisation’ of the United States”. Fake scares to whip up paranoid whites.

The level of paranoia can be seen from the presence at last Saturday’s event of Rep. Paul Gosar, who has “suggested that the August 2017 alt-right Unite the Right rally in Charlottesville, which led to the murder of counter-protester Heather Heyer, may have been organised by an ‘Obama sympathiser’ and raised the possibility that it may have been funded by Hungarian philanthropist George Soros”. Wibble.

But despite clear cut evidence of foreign interference - the objective of the protests, after all, is to intimidate the judiciary into freeing Lennon - the Government has done nothing, and will continue to do nothing, about it. Why does that matter? 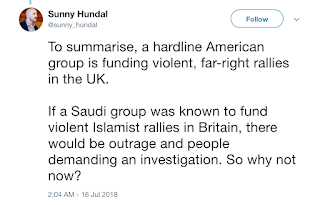 Because, as Sunny Hundal has told, “To summarise, a hardline American group is funding violent, far-right rallies in the UK. If a Saudi group was known to fund violent Islamist rallies in Britain, there would be outrage and people demanding an investigation. So why not now?” It the interference was from a Muslim group, something would be done.

Stephen Yaxley Lennon and his pals are free to speak as they see fit. That isn’t a problem. Foreigners interfering in this country’s affairs - now that certainly is.
Posted by Tim Fenton at 12:28

It'll be the Russians.

Everything else is their fault or interference.

If you believe mainstream media.

Is it possible the screaming man in sunglasses on the extreme right (in many ways) of the second photograph is the Essex restaurateur who had the (thankfully only verbal) run-in with the Al-Jazeera journo Sonia Gallego, as featured heavily on Twitter recently?