The lengths to which papers will go to avoid doing proper investigative journalism are only matched by their inability to figure out the stories they unearth. So it is with the Mail’s apparent discovery of an Unidentified Flying Object (UFO) somewhere east of Glasgow Airport. This was reported by the crew of an inbound Airbus A320 last December, but details were only published yesterday. 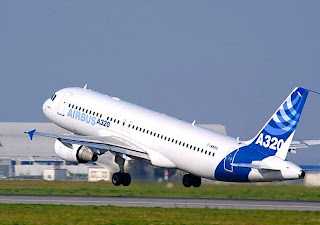 So now we know the Mail’s story-seeking net extends to the CAA’s Airprox reports, these being notifications of “near misses”, aircraft passing too close to one another. Unlike AAIB Bulletin Reports, though, the registration mark of the aircraft is not shown, so it is not possible to tell who the operator was. Nevertheless, the Mail shows its cluelessness by asserting that “Up to 220” could have been on board.

Not on an A320, they couldn’t: 180 is top whack for one of those, even in what kind people call “charter configuration”. But what of the near miss? Well, the A320 was approaching Glasgow from the east, and was passing over the suburb of Baillieston at an altitude of 4000 feet. The sun was behind the plane, and remember, this was in December, so it would have been low in the sky.

The aircraft would have been heading just west of north, before making a long left turn to approach Runway 23 at Glasgow. The flight deck saw what they described as a blue and yellow (or silver) object pass underneath them. But the controller at Glasgow was not in contact with any other traffic in the area, and most importantly, no radar trace of the object could be found.

The only other possibility might have been a glider or balloon, but the low temperature would have meant a lack of thermal activity. It was concluded that even a weather balloon would have shown up on the radar. The incident was given a Category D status, which means there was insufficient evidence to determine the risk involved. The Mail cut that and went with their “UFO horror” angle.

But, had the hacks taken a little time to look at the Baillieston area, and remembered the low sun at the pilots’ backs, they could have easily seen how this could have happened. Close by the built-up area (between Baillieston and the M8) is an industrial estate, with some of the larger buildings having roofs that face just east of due south – directly towards the track of the incoming aircraft.

They appear blue and silver, and a brief reflection in bright sunlight could easily pass for yellow. A first break in the cloud after descending several thousand feet, and there’s your UFO – a brief sighting combined with not quite getting the perspective of the object right. Had it really been serious, the incident would not have been closed. It wasn’t, and there’s no cause for concern.

So no shock, no horror, just overegging the story pudding. No change there, then.
Posted by Tim Fenton at 10:46