So Farewell Then Alex Ferguson

“Football ... bloody hell”. It’s not easy to get across to those whose memory of football doesn’t go back far into the last century that Manchester United was, for many years, a club of perennial under-achievement. Sure, they occasionally won an FA Cup, but after Matt Busby’s last hurrah – winning the European Cup – they drifted into mediocrity. In the 1970s, the team even got itself relegated. 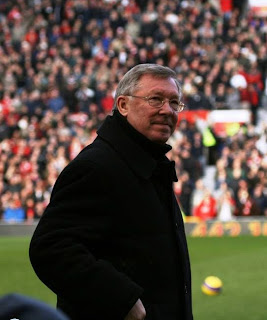 Managers came and went – Frank O’Farrell hardly registered, Tommy Docherty looked set for a long spell in charge before getting himself sacked for an affair with the physio’s wife, and the board ultimately lost patience with Dave Sexton. Ron Atkinson still failed to bring the league title to Old Trafford, and all the while, Liverpool were piling up the silverware.

That was what greeted Alex Ferguson on his arrival just after the start of the 1986-7 season, after Atkinson had been sacked following a dismal start by his team. Many pundits wondered who he was. They hadn’t been watching what he achieved with Aberdeen. That club hardly registered before his arrival at Pittodrie Park, and they’ve done little since his departure.

That Ferguson was the right man for the job was never in doubt: his main problem was the amount of time and effort that would be needed to turn Manchester United round. His assault on the dressing-room drinking culture was typified by the time he strode into a suburban pub brandishing his Manchester A to Z, while the landlord ushered a well-refreshed Norman Whiteside out of the back door.

But it so nearly ended in dismissal: during the 1989-90 season, fans were getting restive and the board wondered if Ferguson might not be up to the task of turning the club round. The sack was to come when Man U were knocked out of the FA Cup. They were not. They won it. That bought him the time he needed. More silverware the following season bought yet more time.

What would have happened had Ferguson been sacked? Many scenarios have been advanced: some protest that the board would have backed him even if the FA Cup had been lost. That’s crap: they had another manager ready to take over. I’ll go further, and name him: Manchester United, had they sacked Ferguson, would have appointed Franz Beckenbauer in his place.

Whether he would have succeeded as Ferguson has, is doubtful. Man U is England’s most consistently successful football club, bar none. Others have challenged briefly, but Alex Ferguson has seen them all off. His team will once again lift the Premiership trophy this term. He has eclipsed even Matt Busby: the only problem he leaves the club is how the success can continue without him.

Who will step up to the plate to take arguably the biggest job in football? More soon.

[UPDATE 1400 hours: it is now being reported that current Everton manager David Moyes is about to be named as Alex Ferguson's successor. Some may be surprised. Not me. Ferguson has put on record his admiration for the way that Moyes has built consistently competitive teams with little in the way of funds.

Why not someone like Jose Mourinho? Well, the "Special One" may be one of Europe's most accomplished managers, but he has a habit of not staying long. Man U enjoyed the benefits of having a manager in place for over 26 years, with their previous best period coming under the 20 year plus reign of Matt Busby.

Moyes has stuck with Everton when many would have lost patience at the lack of money and looked elsewhere. The Old Trafford board want a long-term replacement. Right now, the Sun is playing down the Moyes angle, but if you ever wanted the inside track on Man U, you went to the Mirror.

It's going to be David Moyes. But I fear for the future of Everton FC]
Posted by Tim Fenton at 10:41