Contrasting the behaviour of those in authority with the suffering of ordinary people is nothing new, the most memorable example perhaps being when the then head of the National Coal Board, Alf Robens, was snapped in his robes being installed as chancellor of the University of Surrey, just after a spoil tip had buried the village of Aberfan, killing 116 children and 28 adults. He never lived it down. 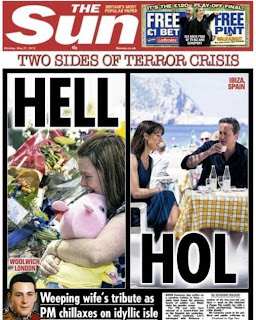 That kind of faux pas became something that politicians and business leaders sought to avoid, if only because it was bad for the image of those wanting to continue climbing the greasy pole. The Fourth Estate, on the other hand, is all in favour of catching those same people in any situation that suggests insensitivity, especially if they are trying to push the “weak leadership” meme.

So it is that the Murdoch Sun, which has been cooling towards Young Dave of late, plastering Cameron and wife Sam all over today’s front page, and deliberately contrasting their holiday in Ibiza with the suffering of the family of Lee Rigby, the soldier killed in Woolwich last week. The suggestion is clearly that the Prime Minister should still be hard at work in 10 Downing Street. 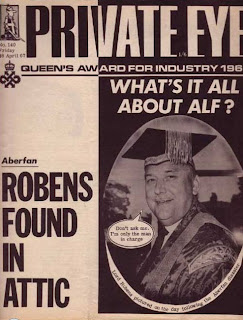 ... with a genuine slice of shameful stupidity

But hang on a minute: while Cameron deserves all the stick he gets about “chillaxing”, there are limits to the amount of use any leader can be to the situation. He already rushed back from Paris last week, and in the process was then slagged off by those who played the other side of the field and therefore asserted that the PM couldn’t do any good by such gestures, so must be cynically exploiting the situation.

He visited Woolwich, meeting soldiers at the barracks where the victim was stationed, and also met with the local MP. He was supported in this by London’s occasional Mayor Alexander Boris de Pfeffel Johnson, who made himself useful by urging calm. So both these pillars of the Tory firmament gave the matter their urgent and immediate attention – what Alf Robens failed to do.

What else can he do? The proliferation of digital camera technology means that his every move is going to be within range, with papers – like the Sun – more than willing to open their wallets, or even better, raid social media sites and get the images for nothing. Not all our leaders are as obsessed with work as Margaret Thatcher was, and nor should they be.

Even the Mail, among its trawling Twitter feeds and digging up archive photos of Ibiza, concedes that public opinion supports Cameron’s handling of the Woolwich killing. So it’s a bank holiday? So perhaps some of those hacks could get out from behind their screens and do some proper journalism for once. Busy CEO takes family holiday is not a shock horror story.

This is a non-story and it’s going nowhere. Keeps someone busy, though.
Posted by Tim Fenton at 11:07