Sometimes one has to wonder why pundits do it: churning out column after column of satisficing drivel, much of which they know to be untrue or opinion masquerading as fact, in a pathetic show of grovelling obedience to whoever calls the shots. One such sad example is Murdoch retainer Trevor Kavanagh, whose latest effort is even contradicted by his own paper.

Kavanagh has been scribbling away for the Sun for so long that most readers will not be able to recall a time when he was not part of its fabric. And once again he has returned to the subject of Europe, not of course that Rupe has told him to, or that the man who pays the piper has a longstanding problem with the EU, and a long held grudge against such inconvenient things as regulation.

“WHO are the real ‘swivel-eyed loons’? Are they the countless millions across all parties who resent Europe’s catastrophic bid to build a federal superstate?” demands Trev, floating the classic false premise of a “federal superstate” and then calling this non-existent entity “catastrophic”. Yes, the silent majority stand shoulder to shoulder with Himself Personally Now (so another false premise, then).

From there, the Sage Of Wapping moves effortlessly to assert that the real problem is Young Dave, Mil The Younger and Corporal Clegg (everybody being out of step bar Nigel “Thirsty” Farage, you see): “the leaders of all three major parties, whose contempt for ordinary voters puts them at odds with half the British nation”. As opposed to pundits whose contempt for readers means fibbing to them, of course.

But do go on: “Yet the PM has one major advantage. Both his opponents are trapped by their own mule-like reluctance to understand the great European gamble is doomed. David Cameron could turn this crisis into the opportunity of his life”. He could? Ho yus. Trev thinks the Coalition could be in trouble (nowt gets past him, then): “we are looking at an election before the scheduled May 2015” he thinks.

Won’t that rather play into the hands not only of Farage, but more importantly for Rupe’s downmarket troops, the hated Labour Party? Well, Trev soon pours cold water on that one: “it has dawned on Labour MPs that they are wide open to a thrashing”. They are? How so? “To their dismay, the party is wallowing in the polls when its lead should be in double figures”. 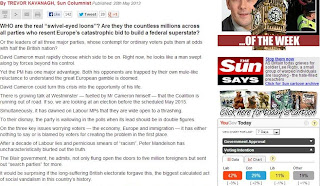 Really? A word in your shell-like, Mr K. Have a skeg at the opinion poll data on the right-hand side of that page. In particular, where it says “Voting Intention”. That shows Labour on 42%, and the Tories on 29. So the poll in your own paper says you’re talking out of the back of your neck. Yes, the Sun says one of its own pundits is telling whoppers. Trev has been caught bang to rights.

But no doubt it pays well, and nobody else wants him. No change there, then.
Posted by Tim Fenton at 12:58

What gets me is the way Kavanagh is regularly invited onto BBC news programmes as some sort of wise old political sage. In reality, as everyone with the slightest interest in the subject knows, no Political Editor of The Sun has ever written an opinion which he was not told to by Rupert Murdoch.