Those of us who understand road, rail and air transport are all too often derided as “bus, train or plane spotters”, until those doing the name-calling let slip that the only reason they do it is to mask their ignorance, and admit that they sometimes find a little bit of real knowledge useful. Such a situation occurred today when Tom at BorisWatch picked up a Tweet from @flightradar24. 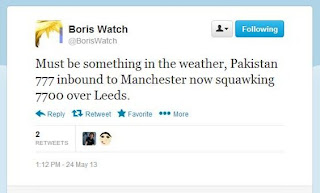 This informed him that a Pakistan International Airlines (PIA) flight, PK709, inbound from Lahore to Manchester, was using the emergency transponder frequency 7700. Oddly, the flight path had looked normal, crossing the Netherlands coast north of Alkmaar, the English coast south of Grimsby, and descending as expected. Then came a turn north out back over the coast, and another turn south. 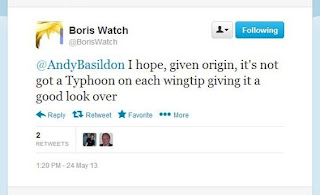 The southward track suggested a diversion to Stansted, which is the default destination for anything that might be terror or hijack related. The airport performs regular training exercises to this end. When the aircraft made a sharp left turn over RAF Coningsby, home of a number of Typhoon fighters, and then right again towards Stansted, an active Twitter conversation was in progress. 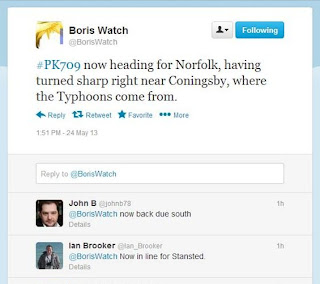 Picking up the fighter escort

More than one participant had by now checked the runway orientation at Stansted, and it was becoming clear that other arriving aircraft were being instructed to join holding patterns. Then the aircraft, a Boeing 777, began a rapid descent and a check of FlightRadar showed its heading was 225 degrees, meaning it was lined up for Runway 22 at Stansted. It landed soon afterwards. 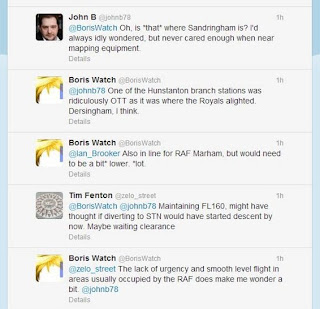 Only after this did news reports start to come via the MSM: the BBC “understood” that PK709 had landed, Sky News (“first for breaking wind”) noted that Typhoon fighters of the RAF had indeed escorted the plane on its approach to Stansted, and the deeply subversive Guardian had some information about potentially disruptive passengers. There was a later report that there had been a bomb threat. 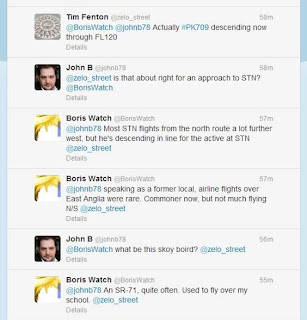 All of this was, to those of us that had been observing events, rather old hat, but welcome confirmation that the analysis of what had been seen on FlightRadar had been more or less correct. Tom at Boris Watch has also posted a TwitPic of the flight’s path up to its final descent into Stansted: the colour of the track changes with its descent to lower altitudes. 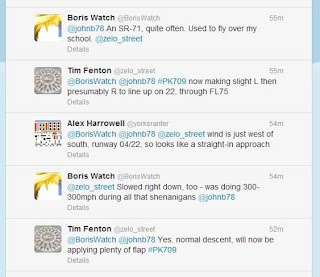 Meanwhile, I’ve no doubt that some of those who struggle to understand what happened will continue to snigger at “bus, train and plane spotters”. More fool them. Others will either get knowledgeable themselves, or know who to ask in future.

Being ignorant, in the meantime, is still not a merit badge.

[UPDATE1 26 May 1600 hours: the Mail has been caught out yet again on this story, not on its lack of speed in picking up on it, but the lack of attention to detail when using photos. Their article includes one picture captioned "The PIA plane as it was being escorted by the RAF Typhoon jet".

But the thought then occurs that the 777 was escorted by two fighters, not one. And regulars on one aviation forum have noticed that the proportions of the passenger aircraft in the photo do not match the wide-bodied Boeing. This is because the Mail has used year-old footage of another incident altogether.

The aircraft in the photo is, in fact, a much smaller Airbus A320, and the fighter is a Netherlands F-16, not a Typhoon. Most Mail readers might not be bothered, of course, but it's still bad journalism: the paper is trying to pass off something which has nothing to do with Friday's incident, except that it involves two aircraft.

So another reason to check with the nerdy types first]

[UPDATE2 28 May 1020 hours: the two men arrested at Stansted have now appeared in court, charged with endangering an aircraft. They have been remanded in custody after an application for release on bail was turned down.

The remand period is over two months - until 5 August. This may seem excessive, but then, it is a clear signal that any incident of this kind is considered serious enough not merely to divert to Stansted, but also to necessitate keeping the suspects in custody.

Both men have indicated that they will plead not guilty. But they can be under no illusion that, should that plea fail, they will be looking at a custodial sentence, and probably a long one. Moral of the story is, when you're on a plane, bloody well behave yourself]
Posted by Tim Fenton at 16:28