Many political careers have been left hanging by a thread after revelations in the “Sundays”, and that of Tory MP and Commons deputy Speaker Nigel Evans appears to have joined the list, with the news that he has been arrested and then bailed after two complaints of sexual assault. But what has driven some of the press coverage is that the complaints were made by two men. 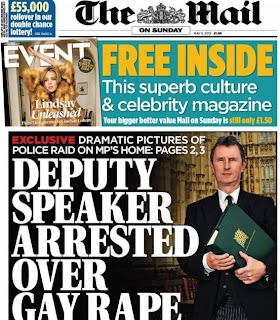 Evans had already come out as gay. That has been accepted by his colleagues, party and constituents. But to some in the Fourth Estate, sexual orientation is a means of frightening the readers, and to no surprise at all, the reporting by the Mail On Sunday, which elevated the news to its front page lead, had to include not only the word RAPE, but prefix it with GAY.

And the Mail Online headline is a classic: “Deputy Speaker leaves police station after being quizzed over gay rape: Tory MP Nigel Evans arrested after officers swoop on cottage”. Cottage – geddit?!? Yes, while the BBC and Guardian are reporting this in as factual a way as they can, given the circumstances, the inhabitants of Northcliffe house are in full Finbarr Saunders mode, kersnicking and fnarring into their screens.

This is despite “Mr Evans ... out as gay in a 2010 article for The Mail on Sunday”. Yes, he ‘fessed up to the same sodding paper, and yet there is still room for the vindictive spirit of Paul Dacre to extract one more pound of flesh. And it’s another example of “we knew all about it, honestly”, except that they, as with all the other recent cases, did and said nothing at the time.

“This is the latest, and potentially most explosive, in a series of high-profile arrests over allegations of a sexual nature, some of which go back more than 40 years ... There have been wild rumours about the involvement of politicians – but until now, none has been arrested. The arrest ... brings the matter right to the heart of the Establishment”. Suddenly they know all about it.

And, as the man said, there’s more: “He held a series of senior posts and was Parliamentary Private Secretary to William Hague in 1996, when Hague was in the Cabinet as Secretary of State for Wales”. Yes, it’s an opportune moment to indulge in a little nudge-nudgery about William ‘Ague as well. The amount of sniggering and sounds of “spab spab” must be audible all over Kensington.

It’s a strange kind of morality that the Mail titles seek to impose on their readership, and politicians in Westminster and elsewhere. And what is yet more disturbing is that they are, by default, allowed to get away with it, in turn using and then trashing the likes of Nigel Evans in order to sell papers and stiffen the backbone of their readership. And it won’t stop when Paul Dacre retires.

Meanwhile, in the real world, collateral damage victims are left to sort their lives out.
Posted by Tim Fenton at 10:20