There are some subjects that are compulsory for the obedient hackery of the legendarily foul mouthed Paul Dacre, and one of these is Beeb Bashing. The Corporation has committed the heinous sin of not only continuing to exist despite all attempts by the Vagina Monologue to have it disbanded, but also of reporting news in as objective and balanced a manner as possible, which is unforgiveable. 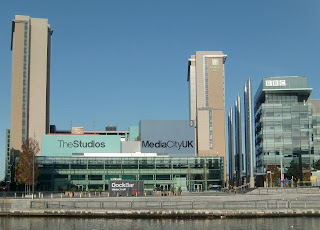 And one favourite line of attack in kicking the Corporation is trowelling on accusations of waste. This, in the recent past, inevitably leads to the relocation of staff and programmes to Salford Quays, and today Paul Revoir, this time in concert with Alasdair Glennie, has returned to the subject, with “900 BBC staff handed average of £23,000 to move North leaving MPs furious at 'colossal waste'”.

Note that there can be no reference to “reimbursement”: that payment is a handout, a bung, a bribe, something unnecessary, the kind of thing that Hard Pressed And Hard Working Ordinary Taxpayers (tm) do not get. Those people must therefore become Very Very Angry, especially if they are Daily Mail readers. Then Mail pundits wonder why BBC staff don’t read their rag.

Had anyone only read the Mail report, they would not know that the majority of staff who relocated received less than £10,000 in compensation. Nor would they have read that the exercise came in under budget, or that the National Audit Office (NAO) judged that, overall, “the Corporation had done a good job in controlling the cost of establishing its new BBC North broadcasting and production base in Salford”.

Nor will Mail readers read that the NAO concluded that it was “too early to judge the long-term impact and value for money of the move for licence fee payers”. Instead, the Dacre attack doggies go to rentaquote Tory MP Phillip Davies: “This report shows what we already knew, which is that the move to Salford is a colossal waste of money”. Then they select part of that quote for their killer headline.

But hold on: the headline said “MPs furious”. Phillip Davies, despite the amount of hot air he produces, is only one MP. Where are the others? Well, the Mail tells that “The influential Public Accounts Committee of MPs promised to investigate the corporation’s financial affairs”. Fine, but Davies is actually on the Culture, Media and Sport Committee, not the PAC.

And the PAC has only said it will look at the BBC’s finances, which, given it is a publicly funded body, one would expect it to do. There has been no expression of “fury”. So, apart from the usual Mail fact selection, we have an act of blatant dishonesty. Perhaps Douglas Carswell and Peter Bone were unavailable for comment. Whatever the excuses, it’s crap journalism.

But it keeps the readers in line and sells papers, so that’s all right, then.
Posted by Tim Fenton at 10:48