As if all the masses of copy generated over the brutal killing of an off-duty soldier in Woolwich last Wednesday were not enough product for those who scrabble around the dunghill that is Grubstreet, now has come another attack on a member of the military, this time in Paris. While it is too early to draw conclusions or parallels, this has not stopped the punditerati from piling in once more. 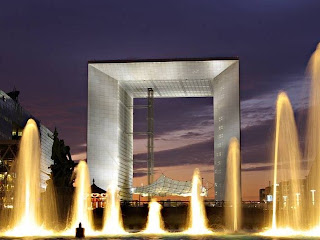 What is known is that the soldier was on patrol at the Grand Arche De La Défense station, an interchange between the Métro and suburban RER networks which also serves the nearby business district. He was with a number of colleagues: the circumstances were rather different to the Woolwich attack, where a lone soldier was apparently picked out, then run down and repeatedly knifed.

The group were approached from behind by one man who stabbed one of them with a short-bladed knife. The assailant was “said to be a bearded man of North African origin”. The blow apparently struck the target in the neck, with the attacker then running off into the nearest crowd before the other soldiers could react. It looks very much like an impulsive, opportunist attack.

Indeed, the French Interior Minister, asked to comment, observed “There are elements - the sudden violence of the attack - that could lead one to believe there might be a comparison with what happened in London. But at this point, honestly, let us be prudent”. Prudence? This is not what the Mail wants to hear, and so it has immediately declared it a “Woolwich copy-cat attack”.

Moreover, the URL contains the phrase “jihab wearing maniac” (there’s no such thing as a “jihab”, and “hijab”, which the Mail may have been intending, is something worn by Muslim women, not men). The Mail also insists on asserting that the soldier had his throat “slashed” (the garment the attacker was wearing is more correctly described as a djellaba).

The Mail is not alone in ratcheting up the drama: the Telegraph also describes the incident as a “Woolwich copycat attack”, before telling readers that “France is considered a hotbed of radical Islamists”, so don’t bother doing that Paris city break this summer, folks. And it’s the same story in the Express, which also makes the “hijab” mistake when describing a male attacker.

All of which shows not only that there is some abysmal journalism out there (in the case of the Express coupled to the lack of sub-editors), but also the insistence in coupling an opportunist attack in Paris to a clearly pre-planned one in London. And for what? More cheap attempts to frighten readers and push the “scary Muslims” agenda. It must be a bank holiday weekend in England.

That’s when slow news days and slow hacks come together, folks.
Posted by Tim Fenton at 14:32