Much copy has been generated in the past month from the assertion by the Rt Hon Gideon George Oliver Osborne, heir to the seventeenth Baronet, that the avoidance by the UK of a “triple dip” recession means that the economy is “healing”. This has then been talked up by a succession of right-leaning pundits into some kind of success story, meaning the Tories will romp home in 2015. 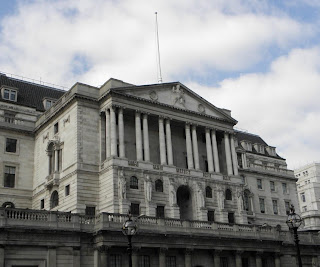 That many households are seeing budgets progressively squeezed, with rising prices not balanced by equivalent rises in incomes, does not seem to bother the punditerati, probably because their number does not contain anyone who is having to think twice before splashing on weekend breaks or longer holidays, and certainly not any restraint on numbers of nights out.

So it was no surprise to see City AM reporting the good news, along with the encouragement from editor Allister Heath, the well known stooge of the so-called Taxpayers’ Alliance, that we should “allow people to build more homes and airports” [my emphasis]. Yeah, it’s all the fault of regulation – if only folks could just go ahead and plonk airports anywhere, the problem would be solved.

Sadly, this is total crap: Heath would be the first one protesting if the approach or departure path of an airport came anywhere near his back yard. And the deeply subversive Guardian noted that this very wonderful news had not stopped yet another credit agency stripping the UK of its Triple-A credit rating, or indeed that the man from IPPR described the economy as “stuck in a rut”.

That, though, did not stop the Mail presenting Osborne with a soapbox from which he proclaimed “Yes, Britain IS on the move again - all because we didn't take the coward's way out”. Really? “The economy is healing slowly, the tough decisions we have taken together as a country are beginning to pay off – and in me, you have a Chancellor who is going to stick to the course we have set out”.

But the International Monetary Fund (IMF) is not so easily impressed, noting that the UK was “still a long way from a strong and sustained recovery”. Crucially, “Of particular concern is that capital investment (as a share of GDP) is at a postwar low, and that youth unemployment is high”. The report continued “The prospect remains for weak growth ... risks remain tilted to the downside”.

The Fund also points out that “banks are not restored to healthy functionality”, that some interest rates remain higher than before the crisis, and that public debt is rising. For some reason, although these are not difficult subjects to present to their audience, the press has, generally, not given them the same stress as the Chancellor’s propaganda piece. Figure that one out for yourselves.

So, despite all the hot air, we are indeed stuck in a rut. Thought you’d like to know.
Posted by Tim Fenton at 14:48