As I pointed out yesterday, the idea that the so-called Taxpayers’ Alliance (TPA) is “non-partisan” is a total sham. And to reinforce my assessment, the TPA has today produced a steaming pile of pro-Government propaganda that removes any doubt as to whose side they are on. The grandly titled “research note” claims to be the result of “research” and concludes that public sector pensions are “unsustainable”.

The TPA headlines its findings “New TPA Research Reveals That There Are More Former Civil Servants Drawing A Pension Than Paying In”. Shock horror. They go on to claim “the number of retirees across the public sector is fast catching up with the number of active members”. But no comparison of numbers over time is given, and we know not to take the TPA on trust.

There is also much bandying about of the term “unfunded”, but if the contributions to the scheme are sustaining the claims on it, then that is not true. The TPA claims that there needs to be reform, as there is a growing shortfall – and that would be “unfunded” – but manages to ignore completely previous reforms which will see the amount of GDP consumed by public sector pensions fall over time. 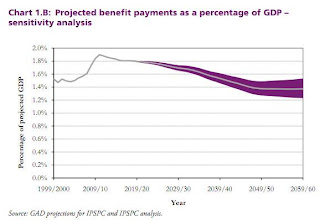 This is illustrated by the chart from the Hutton report which one might think the TPA had seen, showing the percentage of GDP falling steadily over the next 40 years – and to a level which is likely to be lower than seven or so years ago. But the TPA has no truck with this, and concludes “Trade Unionists should go for reform, not strikes”, as if this is another of their zero sum games.

And then Sinclair cranks up the envy and lets the mask slip: “this will be extremely tough on ordinary families who are struggling to save for their own retirement [which is why the TPA advocates abolition of the minimum wage and lowering the poverty line] ... the Government must face down the unions”. So, once more, the TPA claim of being “non-partisan” is shown to be a sham.