Anyone unfortunate enough to have to read the Daily and Sunday Express on a regular basis might have formed the opinion that the UK was about to leave the EU, rather than the idea not having even passed a Commons vote. Today’s Express front page lead reinforces the thought. But it is based on nothing more than the bluster of a former UKIP leader. 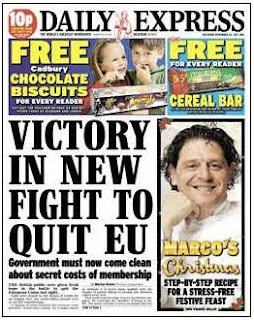 “Victory In New Fight To Quit EU” tells Martyn Brown, then follows it with “The British public were given fresh hope in the battle to quit the European Union last night”, suggesting that the House of Lords sits on Friday evenings, which it does not. But it’s always “last night” in Express La-La land. Also in La-La land is the assertion that “Last month we forced a historic vote on a referendum”.

The Express did no such thing, although a large number of people signing an online petition – not run by the Express – may have had something to do with it. The Express “crusade” is a joke, rather like the rest of the paper: it might be taken more seriously if the constant deluge of anti-EU stories (sample HERE) actually bore some resemblance to reality.

But what of events in the Lords? Most of the quotes come from Lord Pearson, who stepped down as UKIP leader in favour of Nigel “Thirsty” Farage, because a one-man band is marginally better than a no-man band. Pearson talks of “whether we should leave the EU” but then says that the bill being debated and then waved through “does not deal with that question”.

It doesn’t? “It merely requires the Chancellor to set up an impartial inquiry into the economic costs and benefits arising from our membership of the EU”. Where’s the “victory” in that, Express hacks? Especially if the conclusion does not match the screaming rhetoric. The story is based on Pearson’s opinion, and the fact that two other peers made sympathetic noises.

Moreover, the article is undermined by first frothing that “Britain poured a colossal £18.5 billion into the EU last year”, then conceding “the UK made a net ... contribution ... of £10 billion last year”. The characterisation of EU workers as “fat cat Eurocrats” also does not help the cause, and nor does the comparison of their remuneration packages with UK Civil Servants’ salaries.

It’s muddled, cheap, and very nasty, and manages to find precisely zero evidence of any “victory”. But it contributes to keeping the dwindling band of readers frightened, and the Express profitable. And d’you know what that makes it? Yes, another Benchmark Of Excellence.