Rupe and his troops must have thought that, with the continuing cascade of revelations from Phonehackgate, things couldn’t get much worse. And then, on Friday afternoon, things duly got worse. A lot worse. Because one of those troops has been arrested on suspicion of participating in the oldest of The Dark Arts, that of bribing a serving Police officer for information.

And it’s not any old hack who has had his collar felt: Jamie Pyatt has worked for News International for all of 24 years. His arrest is connected to a six-figure amount of money which is thought to have changed hands to facilitate the passage of otherwise confidential information to the Sun newspaper. Pyatt is looking at what the more tactful call a custodial sentence.

Moreover, the old days when, as Nick Davies put it in Flat Earth News, “dog doesn’t eat dog”, are over: the Guardian has company in reporting the news this time round. The Maily Telegraph named Pyatt and gave the piece prominent billing. The Independent was in there too. Even the Mirror, which might have desisted from openly mentioning its rival paper, has the story (but not the name).

What is more revealing, though, is those supposedly fearless pillars of the blogosphere who have thus far declined to mention the arrest. Step forward the perpetually thirsty Paul Staines and his tame gofer Henry Cole at the Guido Fawkes blog, the Laurel and Hardy of the blogosphere, who kept schtum for several hours after the story broke. 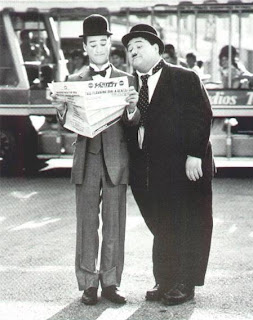 Finding out what they're not talking about

That, though, is little surprise, given the inability of Staines and Cole to call Phonehackgate correctly in the first place. Their inability to follow the money and instead launch an evidence-free campaign against Piers “Morgan” Moron gained them no credibility at all – plus a few more news outlets who won’t take them on trust again – and their unwillingness to look elsewhere is telling.

In the world of Staines and Cole, going after their pals – that’s the Murdoch press, Associated Newspapers (the Daily Mail and Mail On Sunday), and the Maily Telegraph – is something they are unwilling or unable to do. In their world of blinkered tribalism, everything bad is caused by rotten lefties, which means the Mirror, Guardian and above all the BBC.

Still, they’re number one, or so they say. Keep up the ritual incantation, lads.

[Staines and Cole have had a whole day to raise a single Tweet on this story, but have failed to even reach the start line. Fingers in ears, La La La, they can’t hear you (continued excuse #94)]

You're being "wilfully blind" here. The Guardian report on this was linked from the Seen Elsewhere section for well over twenty-four hours before your wrote this devastating take down.

Hello Hen, and good to see you owning up to looking in.

The post was written the previous evening, but as you can see elsewhere, I had a rather early start on Saturday and no opportunity to post it until after arrival in Madrid.

And, as to the "wilful" part - this is a major development. Anyone looking in on the Fawkes blog should not have to be scouring the small print. Resorting to such means shows that you and Staines are being positively discreet.

After all, you wouldn't want to upset your pals at the Murdoch press, eh?

Ha, cute. But no, you are being much like the wikileak crowd who saw a conspiracy because we were only linking to in depth analysis of the cables rather than doing our own. Much like that situation if someone else has already written it why bother echoing, when a simple link will do lead the reader to the same content.

Hardly the small print given it's in the second most prominent spot on the site and will send a couple of thousand readers in that direction every day.

Enjoy your holiday, maybe take some time to relax, it will do you the world of good.

Never denied reading this site, someone has to, but I know you're so keen on accuracy. Will be sure to slip in a stray apostrophe sometime next week for your next attempt at Pulitzer.

"Stray apostrophe" eh Hen? Most revealing. Hey, aren't you and Staines keen on accuracy? How do you expect to nail Piers "Morgan" Moron without it?

I note that you do not otherwise dissent from the contents of this post.