The dwindling band of hacks who labour to cobble together the Daily Express on the smallest of budgets inevitably fall back on subjects that need little investigation, while yielding maximum why-oh-why value and – hopefully – keeping readers interested. Thus the continual tide of knocking copy aimed at the EU. And thus the number of stories about the EU budget.

After all, budget negotiations go on for many weeks every year, then that budget is set, and after that, there’s room for the pundits to pile in and string it out even further. It’s a valuable source of column inches. And so it proved this year: back on October 7, the headline screamed “Government Slams EU Budget Increase”, as readers were told this could exceed 5%.

At the same time, the piece told that “an inflation only increase of 2%” was “the most the EU should expect”. And, in case readers didn’t get it the first time, on October 12 came “EU Greedy Lot! [geddit?!?] MEPs Vote For £5.7BN Budget Rise”. This, though, needed further reinforcement, so on October 27 came “Scandal Of EU’s £116BN Budget”. As Sir Sean nearly said, I think we got the point. 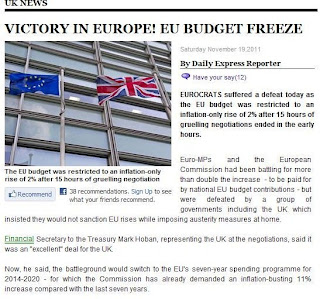 But the Express also needs to convince readers that its “crusade” is having an effect, so last Saturday came the crude and jingoistic “Victory In Europe! EU Budget Freeze”. “Eurocrats suffered a defeat today [the EU works Saturdays in Express land] as the EU budget was restricted to an inflation-only rise of 2%” trumpeted the piece, which affirmed that this was “a real-terms freeze”. 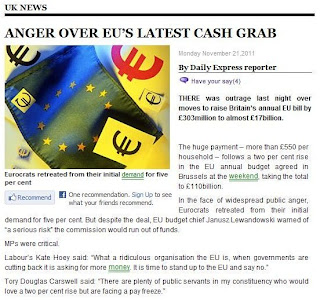 So the budget agreement was A Good Thing, or rather it was A Good Thing on Saturday. By today, the Express hacks had reconsidered, and decided it was A Very Bad Thing. “Anger Over EU’s Latest Cash Grab” screamed the headline, telling that “There was outrage last night” [the EU also works Sundays in Express land]. The UK’s contribution was pronounced “A huge payment”. 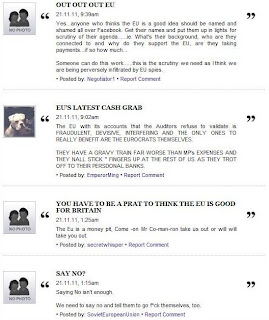 Someone missing their medication?

This editorial line even met with the approval of those who post comments on the Express site: a sample of these, incoherent, abusive, paranoid and slightly menacing, is shown above, just to emphasise that there are people somewhere out there that believe what they read in the paper.

Facing both ways on an issue just to frighten the readers and keep them buying your cheap and nasty papers? That’ll be another Benchmark Of Excellence.