The dwindling band of hacks whose task it is to labour in the service of Richard “Dirty” Desmond and put together the increasingly cheap and nasty Daily Express seem to be running an office competition: to top the last ridiculous EU scare story by putting about even more ridiculous EU scare stories. Facts to support these need not enter: whipping up fear and hatred is more important. 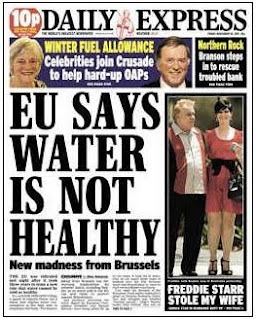 So we come to today’s Express front page: “EU Says Water Is Not Healthy” it thunders. In a supposed “exclusive” (which is code for “no other paper was sufficiently desperate or batshit enough to cobble up this story, given the lack of facts to support it”), Giles Sheldrick asserts that “it took three years to issue a new rule that water cannot be sold as healthy”.

The pejorative language then piles in behind the headline: “scarcely believable ... bizarre diktat ... beyond parody ... bizarre regulations ... extraordinary conclusion”. Readers are told that “any producer breaching the order ... faces being jailed for up to two years” (no they don’t) and are fed the usual drivel about curved bananas and Cornish pasties.

But there is, as usual with Express EU frighteners, a grain of fact buried somewhere under the steaming pile of bovine by-product being shovelled about by those who scrabble around the dunghill that is Grubstreet. The European Food Safety Authority (EFSA) has been considering claims made for a whole range of products as to their supposed benefits – or lack thereof.

In the three year period cited by the Express, over 2,700 such claims were considered. Scientific evidence was consulted. One might think that the work, which has exposed quack remedies and baseless claims, would have its benefits recognised, rather than the press taking out of context the attempt by two food industry scientists to get approval for their preferred form of words, and failing.

Because that is what is behind the Express story. The claim “regular consumption of significant amounts of water can reduce the risk of development of dehydration” was not allowed by EFSA. And the reason was let slip by the Maily Telegraph, quoting a spokesman for the Nutrition Society: “The EU is saying that this does not reduce the risk of dehydration [my emphasis], and that is correct”.

“This claim is trying to imply that there is something special about bottled water which is not a reasonable claim”. So nobody says “Water is not healthy”, which the Express headline claims. Bottled water cannot be claimed to protect against dehydration, because it doesn’t. Sure, it can help to keep the body hydrated, but that’s not what was claimed.

Cheap and nasty frightener out of nothing? Another Benchmark of Excellence.

[UPDATE November 19: the Express has attempted to spin a press release by the manufacturers of Highland Spring water as support for its article, rather than a routinely cynical attempt to get some free publicity on the back of yet another EU-bashing piece. This latest Express article recycles so much of the company's blurb that it extends to telling readers how long the brand has been in business, and the name of its current owner. And there's a quote from UKIP's appropriately named Paul Nuttall, of course]

Dr Steve Novella has his take on it and he seems a little more than surprised at the EFSA ruling.

This "dehydration" issue, interesting to me..

In essence this submission was rejected on a technicality, but it was a politically motivated submission in the first place designed to show how buearacratic EFSA are.

And in any case a previous positive opinion by EFSA already let you say water was hydrating - this is why Highland Spring aren't planning on changing anything, they don't need to!

I blogged about this but can't seem to link from my phone...