Commercial pressures on newspapers mean less hacks who understand anything outside the mainstream: specialism nowadays extends to sport – and often only football – and, for the quality titles, the arts. Transport matters often end up being covered by the same person who road tests the latest cars, with the all too predictable result that they know less than many in their audience.

At the Maily Telegraph, Alistair Osborne was an honourable exception: he was well regarded by even the specialists on the Rail industry. Sadly, though, he sprayed his credibility up the wall in one go with a formulaic EU-bashing piece in July claiming that the Thameslink order was won by Siemens because they could finance the deal more cheaply. This was soon debunked. 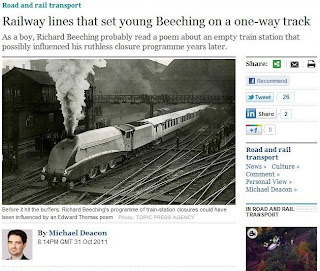 Beeching was not here until 26 years later

So now Telegraph readers have the wisdom of Michael Deacon, whose latest effort, about former BR chairman Richard Beeching, is confused and misleading. He talks of “a poem about an empty train station”, while someone has rustled up a stock photo of a station that was anything but empty: London’s King’s Cross, taken in September 1935 as the “Silver Jubilee” departs on its first trial run.

Many hacks didn’t get on board, hence the numbers watching from an adjacent platform or on the track, a sight that would give anyone involved with health and safety palpitations. This run was famous for one thing: the speeds achieved included two maxima of over 112mph, and locomotive designer Nigel Gresley had at one point to tell the driver to “ease his arm”.

The “Silver Jubilee” was a commercial success, and ran full most weekdays as it brought businessmen from Newcastle and Darlington to London for a few hours at head office before whisking them back north. Its successor trains in the 1960s were one of the things Richard Beeching positively encouraged. It was followed by more “streamliners” before War intervened in 1939.

Deacon also misreads Beeching completely: by the time the former head of ICI arrived at BR, debts were spiralling and the organisation was not playing to its strengths. Closure of loss-making lines and services did not depend on who had read what poem at school: Beeching was utterly unsentimental, and even included his local station in Kent in the closure proposals.

Beeching also encouraged BR to develop its own management programme, to realise that it had to function as a business, and that it had to become far more efficient over time. From his lead came the business led railway of the early 1990s, before “Shagger” Major and his sell-offs caused such disruption. There is a story to be told about Beeching: it’s sad that the Telegraph can’t be bothered.