Lisbon has in the recent past been a very accessible city: few parts of the city are off limits to the public, unless admission charges are levied. That extended to the Parliament building at the foot of the long hill that leads up to the suburb of Estrela, but then came the marches and the protests. The Police turned out in force, and then the barriers went up. 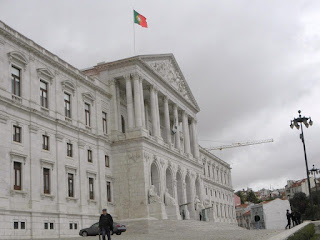 Actually, visitors can still get close up to the building, and most of the time security is discreet. But opposite the imposing facade of Parliament, a protest vigil has begun, and access from the front steps has been barred. Banners hang from the barriers, making a sad contrast between the comfortable within, and the less fortunate outside. 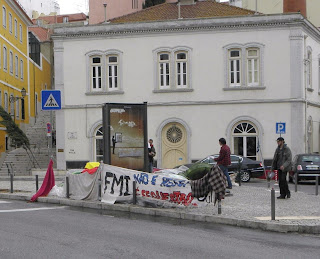 This isn’t a protest on the scale of that outside St Paul’s cathedral, which has provoked such a storm of controversy, but it is a vigil which has not been deterred by some appallingly wet weather, and the apparent indifference (thus far) of those elected to serve. 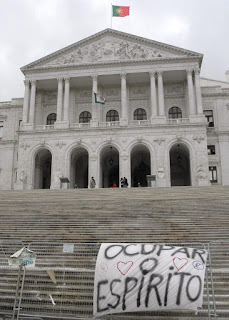 And, yes, there are more strikes and marches lined up between now and the end of the year in and around Lisbon. Those giving all their attention to Greece might do well to remember that there are other countries in the Eurozone suffering the less than beneficial effects of austerity programmes right now.