On a quiet and still damp morning in Lisbon, I walked across to Santa Apolónia station, wondering if I should have had another ten minutes in bed. Soon after arrival, another downpour gave the definitive answer. At least the 0730 Intercidade for Porto was ready on Track 3, and well filled for a Saturday, despite rising ticket costs. It made swift progress to the railway town of Entroncamento. 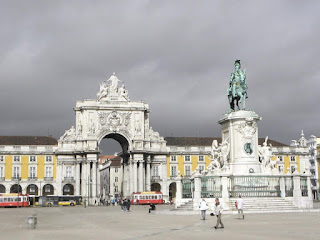 Lisbon, between the showers

There, a change of train was needed to continue the trip into Spain. A single coach railmotor rolled out of the bay platform at 0845, bound for the walled town of Elvas and then Badajoz. Service cuts could yet remove this train, the only service to cross into Spain from Elvas, a strange paradox given that in future there will be a high speed rail link between Lisbon and Madrid, and routed this way. 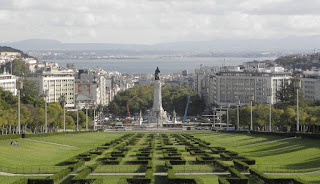 A few minutes late – the state of the track that crosses the border is pretty poor right now – we arrived at Badajoz, an overspecified station with three platforms and lift access to two of them, but which has all of seven departures a day, six of them from the platform not needing lift access. Three of those six serve Madrid: connecting provinces to the capital is what many Spanish rail links are about. 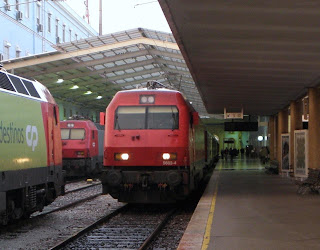 And, although there was a step change from an early 1950s railmotor – albeit refurbished a decade ago – to a new tilting train, this was still well off the electrified network, and all single track. Towns are well spaced out here – some runs between stops took a full hour – and the terrain means lots of twists, turns and rather tasty looking gradients. It’s a long journey. 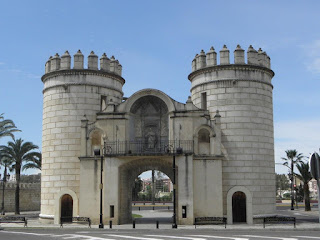 How long? Another five and a half hours to do the 320 miles or so to Madrid, despite some good speed, and a journey ending well after dark at a characteristically chaotic Puerta de Atocha station. Fortunately, access to the Metro heading north is step free and the ticket machines work (like Barcelona, and Boris’ apparent intention, there is no manned ticket office), though ticket prices have gone up. A lot. 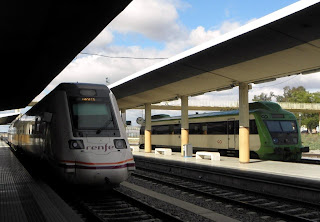 Old and new together at Badajoz

What did I find out on the way? There are a lot of folks sleeping under canopies and archways in Lisbon – you see that by being out and about early. Lots are taking the Intercity train. Few are using the link into Spain, and not many boarded the afternoon train from Badajoz to Madrid. But the Spanish capital is as busy as ever, although after Saturday night that might change.

I could have done this trip by air, but would have missed the towns, the sometimes rugged scenery, and the sense of space that rural Portugal and Spain gives you. And I would have missed the supermarket in Badajoz, and the customer in front of me who handed back a cake as it took her spending over the amount of cash in her hand. The bloke on the till sent it back, together with someone else’s large pizza.

Prices go up, the money to pay for them does not. Go figure.

Looks like another cross-border train service that has died a death. Great report you gave there of a cross-border link that has just been axed:
www.europebyrail.eu/bus-links-from-spain-to-portugal.