TPA – Demonise And Be Damned

Someone who occasionally looks in on Zelo Street has suggested I check out the latest attempt by the so-called Taxpayers’ Alliance (TPA) to demonise those in society least able to defend themselves against knocking copy, that being the disabled. The TPA has not produced its own copy on this, but has instead (tellingly) taken a Daily Mail attack piece as data.

Leading the TPA charge against the alleged ease with which some access Disability Living Allowance (DLA) is non-job holder Emma Boon, their Campaign Director. This title means she is available for issuing soundbites for broadcast media, formulaic copy for hacks, and otherwise to look smart and presentable so the more gullible viewer misses her putting the boot into the poor and vulnerable. 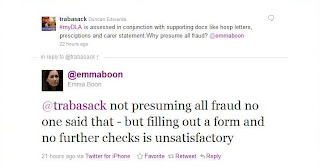 No further checks on the story is indeed unsatisfactory

Such is the modesty of Ms Boon that her Twitter background consists entirely of stills from TV appearances by Herself Personally Now. But her action in suggesting that DLA is being accessed fraudulently is deadly serious, and not at all pleasant. And the Mail, having splashed another pic of the totally modest Ms Boon alongside its knocking copy, has now cynically dumped her. 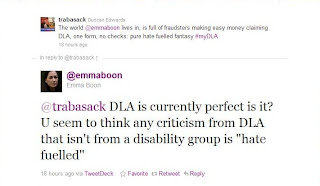 Currently perfect? You ought to know

The original Mail story, under the by-line of Kirsty Walker of EU flag frightener fame, asserted dishonestly that 94% of new claimants for DLA started getting payments “after only filling in paperwork”. Then it was claimed that 16% received DLA – “worth £70 a week” – after “merely filling in a claim form”. It was only later in the piece where Ms Walker conceded that 78% of claimants provided backup evidence. 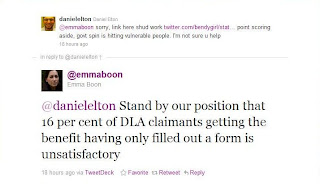 Did you bother finding out about even one of them?

The article went on: “Critics warned that thousands of benefit cheats were being allowed to ‘slip through the net’”. The only independent critic quoted was Ms Boon: indeed, she also told that “there is a chance that more cheats have slipped through the net”. Emma Boon and her fellow non-job holders at the TPA have between them supplied details of cheats totalling precisely zero. Am not demonising, and am totally modest

Moreover, FullFact has cautioned against unconditionally accepting the Mail story. And, although the Mail followed up Ms Walker’s knocking copy with a comment piece of singular nastiness “Of course, there will always be people who are too ill or disabled to work ...but”, the paper, under the same hack’s by-line, has now performed a volte-face.

“Disability benefit crackdown ‘will hurt the most vulnerable in society’ claim campaigners” is today’s headline. Comments have been sought from Mind, the Disability Alliance, and the National Autistic Society. The emphasis is on concern for those who may lost benefits. But there is no room for the TPA: Emma Boon has been dropped, as has her talk of “cheats”.

Swim with the sharks, get bitten. You know how it is, Emma. Stay modest.